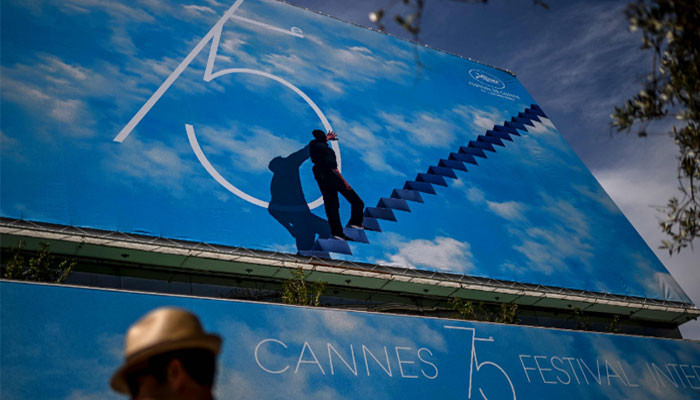 The last touches were being laid in Cannes for the 75th anniversary edition of the world´s leading film festival, promising a return to its full glitz.

Dangling from ropes above the fabled Palais des Festivals, workers were unfurling the huge poster for the Cannes Film Festival´s golden jubilee, which this year features an image from “The Truman Show”.

Some 35,000 film professionals are expected between May 17 and 28, hoping for a return to form for cinema´s most glamorous event after two years in which Covid dampened the mood.

“We are ready. The town hall has just redone everything — the whole place — so we hope it will go well,” said Jeremie Tripet, manager of “L´Avenue”, a bistro just off the main drag known as La Croisette.

After Cannes was entirely cancelled in 2020 and held under strict health protocols in 2021, most of the world is expected to be represented at this year´s event, which includes a large industry marketplace alongside the festival.

One major exception is the absence of Russians, due to the impact of sanctions over the war in Ukraine and a ruling from the organisers that state-linked delegates are not welcome.

China is also expected to have a limited presence due to its continuing Covid restrictions.

But otherwise the festival is keen to put the pandemic in the past, with no mandatory masks or health passes this year — and no restrictions to partying.