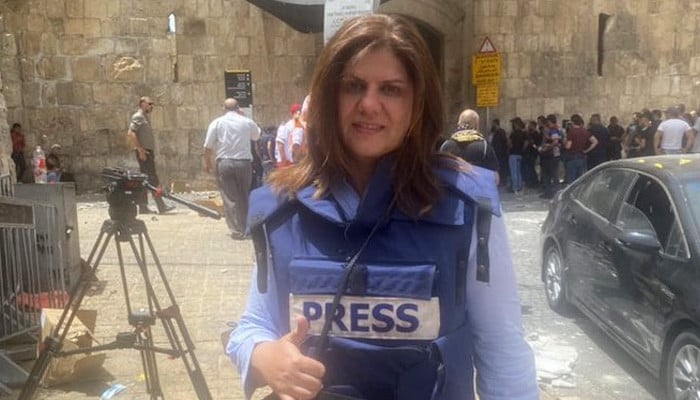 The Israeli army confirmed it had conducted an operation early Wednesday in Jenin refugee camp in the northern West Bank.

It firmly denied, however, that it had deliberately targeted journalists.

“The (army) of course does not aim at journalists,” a military official told AFP.

“There is an ongoing inquiry into this event. We offered and want to conduct a joint investigation with the Palestinians.”

The army said there was an exchange of fire between suspects and security forces and that it was “investigating the event and looking into the possibility that journalists were hit by the Palestinian gunmen.”

An AFP photographer at the scene said Abu Akleh was wearing a press flak jacket when she was shot.

Al Jazeera called on the international community to hold Israeli forces accountable for their “intentional targeting and killing” of Abu Akleh.

Another Al Jazeera journalist, producer Ali Al-Samudi, was wounded during the clash, the broadcaster added.

In recent weeks, the Israeli army has stepped up operations in Jenin, an historic flashpoint in the Israeli-Palestinian conflict.

The Palestinian Authority called Abu Akleh’s killing an “execution,” and part of an Israeli effort to obscure the “truth” about its occupation of the West Bank.

An official of Hamas, which controls Gaza, called the incident “a premeditated murder.”

Media and press institutions should move to expel Israel and consider it an enemy of the freedom of the press,” said Ghazi Hamad of Hamas’s political bureau.

‘Shot in the head’

While the circumstances of Shireen Abu Akleh’s death were not clear, but videos of the incident show that she was shot in the head, according to the network.

“What we know for now is that the Palestinian Health Ministry has announced her death. Shireen Abu Akleh, was covering the events unfolding in Jenin, specifically an Israeli raid the city, which is north of the occupied West Bank, when she was hit by a bullet to the head,” Al Jazeera’s Nida Ibrahim said, speaking from the Palestinian city of Ramallah.

“As you can imagine, this is a shock to the journalists who have been working with her.”

Speaking through tears, Ibrahim said Abu Akleh was a “very well respected journalist” who has been working with Al Jazeera since the beginning of the second Palestinian Intifada in 2000.