HomeENTERTAINMENTAmy Schumer shows off impressive manicure as she steps out in NYC,...
ENTERTAINMENT

Amy Schumer shows off impressive manicure as she steps out in NYC, greets fans 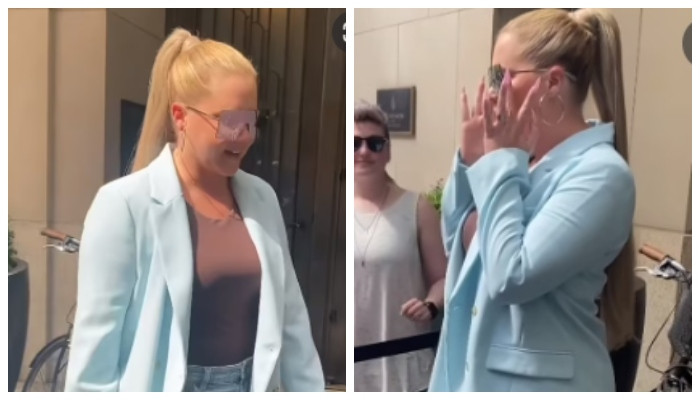 The actress looked sensational in a pair of blue ripped jeans and a blue blazer as she left the Four Seasons in New York City and was greeted by fans outside.

Amy added some height to her frame in a pair of white heels and accessorised with a large pair of hoop earrings.

Taking to Instagram, Amy shared the clip to her 11.7 million followers as she pointed out that her nails were super long.

The star posed for snaps with fans but when asked about signing autographs she simply held up her hands and said: ‘I can’t, look at me.’

Amy asked fans in the caption ‘how do you do anything’ with these nails as she struggled to even push her sunglasses on her face.

She penned: ‘Kamy kardashian for a day! Anyone with these nails how do you do anything?!

‘This was for the @hulu upfronts I got to present with 2 of my new family members @khloekardashian and @krisjenner.’

The I Feel Pretty actress thanked her team for ‘making me a Kardashian’.