Announce elections or sea of people in Islamabad will wash away everything: Imran Khan 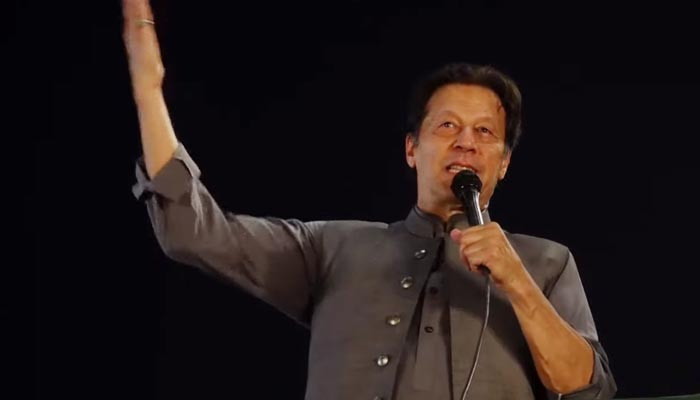 MARDAN: If the date for the general elections is not announced, then the “sea of people” heading towards Islamabad “will wash away everything”, PTI Chairman Imran Khan said Friday.

The PTI chairman has held a series of jalsas in different cities, including Karachi, Mianwali, Lahore, and Peshawar, as he rallies his party workers and leaders against the government ahead of the Islamabad march.

In his address during the Mardan jalsa, the PTI chairman said he was calling people to Islamabad for a “revolution” that sought “real independence” for Pakistan.

“From here, I am giving a message to the corrupt thugs […] and the convict should also hear this: You will not make decisions for the country, but citizens will decide who will rule Pakistan,” Khan said.

The PTI chairman reiterated the United States had “conspired” against his regime, while the current government’s “Mir Sadiqs and Mir Jafars” were involved in it.

Khan said when he came to know about the “conspiracy” then he went to the “people who could stop it. “I told them that if this conspiracy succeeds, then our economy will falter given its current condition.”

The ex-prime minister said he asked former finance minister Shaukat Tarin to tell those who “call themselves neutral” that the economy will collapse, but unfortunately, they did not stop it.

“The dollar is nearing Rs200, the stock market is plunging, everything is becoming expensive […] the media should ask the people how expensive things are as they would do during our government,” Khan said.

The PTI chairman said his party came into power after the “corrupt” politicians had already ruled the country for 10 years. “We inherited a historic deficit as they had destroyed the economy.”

Khan said given the condition of the economy when he formed the government, he went to seek loans from friendly countries — China, the United Arab Emirates, and the Kingdom of Saudi Arabia — to save the country from defaulting.

‘Better to drop an atom bomb on Pakistan’

In a separate conversation with journalists earlier today, Khan said that Prime Minister Shehbaz Sharif was not the only “Mir Jafars and Mir Sadiq”, there are others as well and he would disclose their names when the time comes.

Khan asked the people who supported the “conspiracy” that, were they not worried about Pakistan’s future. “It would have been better to drop an atom bomb on Pakistan than to have these people in power.”

The PTI chairman said he was aware of the “conspiracy” in June, but unfortunately, “all the decisions” were made to weaken his government — and it was eventually ousted.

‘Corruption not an issue for powerful people’

Moving on, the PTI chairman questioned which government official would dare to proceed with cases against “these corrupt people”.

Khan added that he was of the view that corruption would be an issue for the powerful quarters and that he was on the same page as them regarding the matter.

“But I am surprised that such thieves were brought into power. Corruption is not an issue for the powerful people,” the PTI chairman said.

Ties with the establishment

Khan said his relationship with the establishment was good till the last day of his government, but there were two issues on which they did not see eye to eye.

The former prime minister said “powerful quarters” wanted Usman Buzdar removed as the chief minister, but he would tell them that there was “more corruption and governance issues in Sindh”.

The second with the establishment was over Lt Gen Faiz Hameed as he wanted the army official to serve as the Inter-Services Intelligence chief till the “winters”, given the situation in Afghanistan and due to the then-opposition’s “plot”.

The ex-premier said he was still receiving messages from the establishment but he has “blocked their numbers” and would only speak to them once the date for elections is announced.