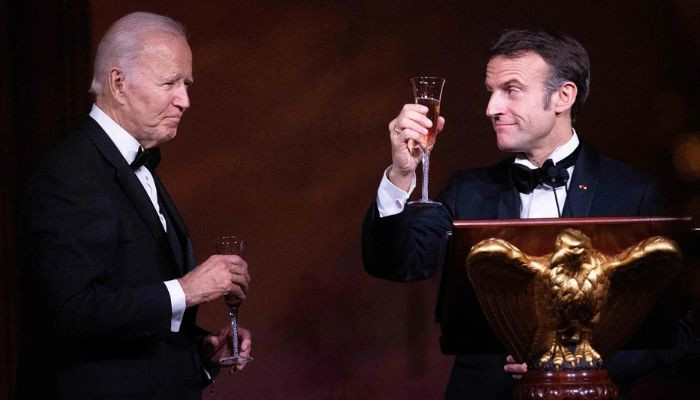 Addressing a joint press conference on the second day of Macron’s rare state visit to Washington, both leaders emphasized their desire to forge a powerful transatlantic alliance supporting democracy — and facing down Russia and China.

On Ukraine, Biden said, “We reaffirm that France and the United States together, with all our NATO allies and the European Union and the G7, stand as strong as ever against Russia’s brutal war.”

The US leader also said that he would be ready to meet with Putin but only “if he is looking for a way to end the war.”

It was Biden’s strongest suggestion so far that he would be prepared to sit down with Putin, but Macron said they both agreed “we will never urge the Ukrainians to make a compromise that will not be acceptable for them.”

The state visit — the first such formal occasion since Biden took office in January 2021 — symbolized how Washington and Paris have buried last year’s bitter spat over the way Australia pulled out of a French submarine deal in favour of acquiring US nuclear subs instead.

At a lavish, late dinner under a glass pavilion on the White House South Lawn, Biden concluded his toast by saying, “Vive la France!” or “long live France.”

In his toast, Macron quoted from the US Constitution and said both countries had often fought together to protect democracy. Referring to election deniers trying to overturn polls in the United States, he said that it was time to stand “shoulder to shoulder” again.

The occasion had seemed to be at threat of being overshadowed by a dispute over US subsidies for the emerging green technology economy. However, both leaders signalled they had managed at least to defuse the row following one hour and 45-minute talks in the Oval Office in the morning.

“We agreed to discuss practical steps to coordinate and align our approaches so that we can strengthen and secure the supply chains, manufacturing and innovation on both sides of the Atlantic,” Biden told their joint news conference.

“We agreed to resynchronize our approaches,” echoed Macron.

The issue revolves around Biden´s signature policy, the Inflation Reduction Act or IRA, which is set to pour billions of dollars into environmentally friendly industries, with strong backing for US-based manufacturers.

European Union governments have been crying foul, threatening to launch a trade war by subsidizing their own green economy sector.

Biden stressed that there would be “tweaks” so that European companies were not unfairly treated.

“We’re going to continue to create manufacturing jobs in America but not at the expense of Europe,” Biden said.

On China, another area where Europe and the United States have not always been entirely on the same page, the leaders said in a joint statement they “will continue to coordinate on our concerns regarding China´s challenge to the rules-based international order, including respect for human rights, and to work together with China on important global issues like climate change.”

The day began with a full military honour guard for Macron, including service members from the marines, army, air force and even a detachment of soldiers in 18th-century Revolutionary War garb. Artillery fired off a 21-gun salute, sending puffs of white smoke into the clear, chilly December sky.

Standing on a red-carpeted podium with Macron, Biden said “France is our oldest ally, our unwavering partner in freedom’s cause.”

Between the two leaders, the mutual appreciation was on ample display as they exchanged hugs, hand clasps and compliments throughout the day.

More than 12 hours later, the state visit climaxed with the kind of banquet that has not been seen in Washington since the COVID-19 pandemic shut down the US capital´s typically busy schmoozing scene.

Their menu kicked off with butter-poached Maine lobster, paired with caviar, delicata squash raviolo and tarragon sauce, then a main course of beef and triple-cooked butter potatoes. The feast rounded off with US cheeses, and finally orange chiffon cake, roasted pears with citrus sauce and creme fraiche ice cream.

Washing all that down were three different wines — all from US vineyards.