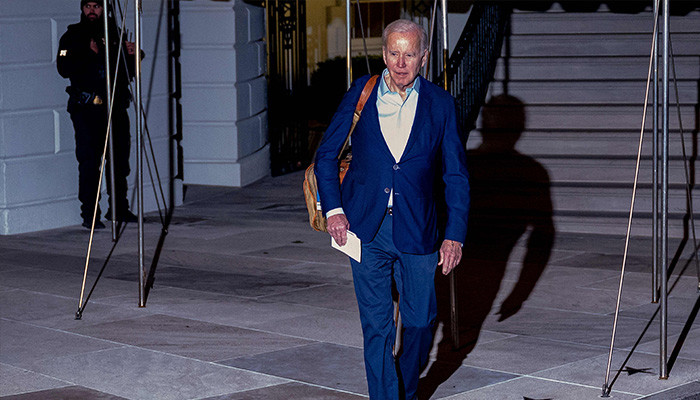 WASHINGTON: President Joe Biden departed Tuesday for the US Virgin Islands, exchanging a deadly snowstorm for a Caribbean vacation — and an expected New Year’s resolution to seek re-election in 2024.

He took flack from early morning Fox News hosts for being “ready to go have a good time” while Americans confront the blizzard.

However, Biden headed to the island of St Croix with a successful 2022 behind him and momentum building for him to declare, at the unprecedented age of 80, that he wants another four years in the White House.

If nothing else, the week’s holiday in the sun will be a welcome break for a president whose first two years in office featured an incredible series of crises — most of them inherited when he took over at the already record age of 78.

The first half of his term saw the peak and ebb of the Covid pandemic, a humiliating exit from the two-decades-old Afghanistan war, 40-year-high inflation, and the continuing fallout from his Republican predecessor Donald Trump’s attempt to upend US democracy.

The Democrat’s planned New Year’s getaway in Puerto Rico last December was canceled at the last minute because of the Covid Omicron surge.

Today, though, Biden is ready for the beach.

At home, his party scored a string of 2022 legislative victories, rounded off with December’s bill protecting same-sex marriage. Once soaring gasoline prices — the most politically damaging line item in any inflation spreadsheet — are almost back to normal.

Abroad, Biden is on a strong roll, leading a Western coalition in support for Ukraine’s battle against Russia, while ramping up an aggressive renewal of US commitment to Asian allies facing China.

Meanwhile, congressional Republicans are in disarray as they prepare to take over the House of Representatives in January, and Trump, still the party’s dominant leader, faces multiple legal threats.

No wonder Biden oozed holiday cheer in an op-ed published by Yahoo News just before Christmas.

“As we look back on 2022 — and look forward to what lies ahead — I have never been more confident about what the American people and the American economy can achieve,” he wrote.

Just three presidents who served full first terms decided to quit without taking a second shot. Trump is on the short list of presidents whose re-election bids failed.

However, precedent goes out the window when it comes to Biden’s age.

He would be 82 at his second inauguration and 86 by the time he left office — almost a decade older than the previous record-holder for old age in the White House, Ronald Reagan, who finished his second term at 77.

Whether age matters is a matter of debate, often brutal.

Republicans try to portray Biden as senile. They point to his periodic verbal stumbles, his shuffling gait, and moments when he gives the appearance of being confused or forgetful.

Backers say that Biden, whose gaffes and stuttering were a feature throughout his career, shows daily that he is in command of the complex job and that many of his qualities come to the fore when he is off-camera at high-stakes White House meetings.

Kevin O´Connor, Biden’s physician, concluded in his annual report a year ago that apart from relatively minor signs of old age, the president was in excellent health and “fit to successfully execute the duties of the presidency.”

A new physical is expected to be completed shortly and O´Connor’s fresh evaluation will be intensely scrutinized.

As for Biden, he wants Americans to judge him on his results, effectively saying age is just a number. “Watch me,” he likes to say.

A decision to run will set in motion an all-consuming battle, potentially ending in a rematch against Trump, who has already declared his own campaign. Should Biden step aside, Vice President Kamala Harris would be the obvious replacement on the ticket, but she could face challengers, potentially sparking internal Democratic turmoil.

Whatever gets decided in the Caribbean will initially remain a closely held secret. However, Chief of Staff Ron Klain says that the announcement is only a matter of time.

“The president will make that decision, I expect, shortly after the holidays,” Klain said this month. “I expect the decision will be to do it.”