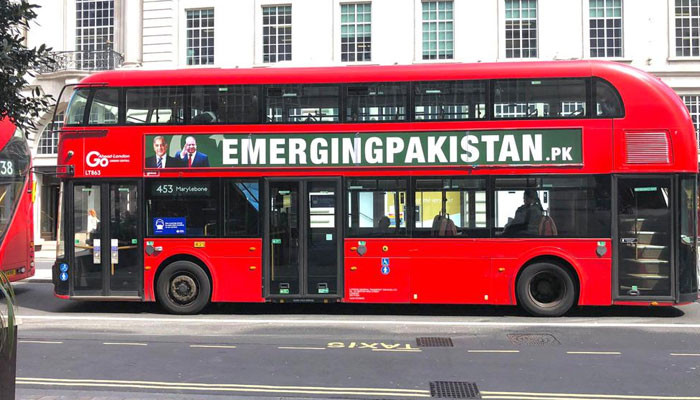 The bus campaign started on Wednesday and will go on for a month. It’s estimated that tens of thousands of people around a vast network of London will get to see these buses carrying the Pakistani flag, emerging Pakistan slogan and pictures of Nawaz Sharif and Shehbaz Sharif.

Around 150 buses will be running on London’s 43 busiest routes covering the entire length and breadth of the city. These buses run on busy routes from early morning till midnight in both directions.

The businessman, who spoke on the condition of anonymity, said: “This ultimate Pakistan branding campaign is running under the banner of ‘Emerging Pakistan’ and will continue for four weeks during which tens of thousands of people will get the chance to know about Pakistan through the iconic London buses daily. We believe that there will be millions who will have seen these buses by the time the campaign ends.”

Leading London advertising agencies estimated this type of campaign would cost around £100,000 to sponsor.

The businessman said he would prefer anonymity because he wanted the highlight to be on Pakistan and not him as an individual.

“In these divisive times I wanted to pay tribute to Pakistan and remind everyone that the brand ‘Emerging Pakistan’ was launched by the 2013-2018 PML-N government when Pakistan’s GDP growth rate was touching 6% and Pakistan was officially ranked in the Morgan Stanley Emerging Markets Indices,” said the businessman.

The businessman believes that Shehbaz Sharif is a “tremendous leader and the meteoric development of Punjab” was a “testament” to his ability.

“The province saw revolutionary development in the areas of modern infrastructure and governance. Shehbaz Sharif brought investment of billions into Punjab and in a decade moved the province 50 years forward with Lahore as its crown jewel. If he is given the runway, I’m confident he can revolutionise Pakistan just like he did in the case of Punjab,” he said.

When questioned on the political implications of the campaign, he replied that as an “apolitical businessman” he considers Shehbaz Sharif a “mentor” and admires his “hard work and achievements”.

“Regardless of political affiliations a man of his calibre and track record deserves our support and appreciation,” he said.

The British Pakistani businessman said the bus campaign is aimed at re-introducing foreign investment in Pakistan.

“Pakistan needs investment and stability. When there is mature and stable leadership in Pakistan, the investment will follow and Pakistan will emerge as a powerful nation steadily realising its true potential,” he said.

In March 2018, Pakistan High Commission London had launched buses in London on a similar theme to mark the 70th independence day.

Pakistan High Commission has confirmed that it had not launched the latest bus campaign and did not know who the sponsor was for the latest campaign.