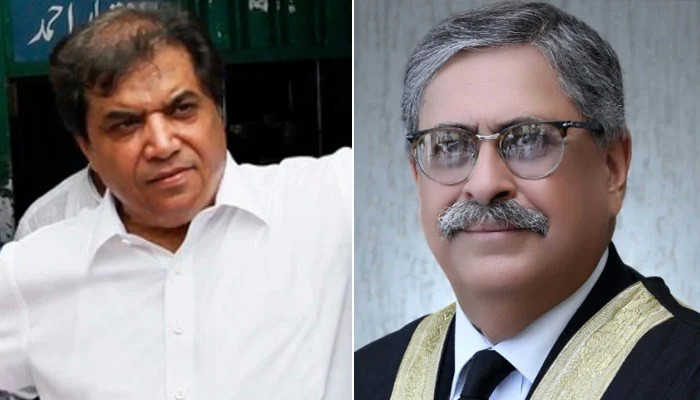 ISLAMABAD: A person sentenced in any case is ineligible to hold any public office in the country, the Islamabad High Court (IHC) on Tuesday said in a case related to the appointment of PML-N’s Hanif Abbasi as a special assistant to the prime minister.

On May 6, Awami Muslim League (AML) chief and former interior minister Sheikh Rasheed Ahmed had moved the IHC, challenging the appointment of Hanif Abbasi as SAPM. The development came days after the newly appointed SAPM had announced a reward of Rs50,000 to anyone who brought him Rashid’s wig.

Muhammad Ahsan Bhoon, Hanif Abbasi’s counsel, argued that the post of SAPM is not similar to the other public offices.

At this, the court said that the special assistant’s job is to advise the prime minister, adding that a person can give his advice to the premier without notification as well.

The court hoped that Hanif Abbasi will not use the public office till the next hearing.

Meanwhile, the court adjourned that hearing till May 27.

During the previous hearing on May 14, the Cabinet Division informed the IHC that a summary had been sent to Prime Minister Shehbaz Sharif to review the appointment of PML-N leader Hanif Abbasi as his special assistant.

In line with the court’s notice, Cabinet Division’s Deputy Secretary Khurram Ghaznavi submitted an interim report in the IHC stating that a summary has been sent to the prime minister through the Ministry of Law and Justice requesting him to revisit his decision regarding the appointment of Hanif Abbasi.

However, the Cabinet Division also clarified that the report submitted in IHC is an interim report and the final report and section-wise replies will be submitted after the orders from PM Shehbaz.