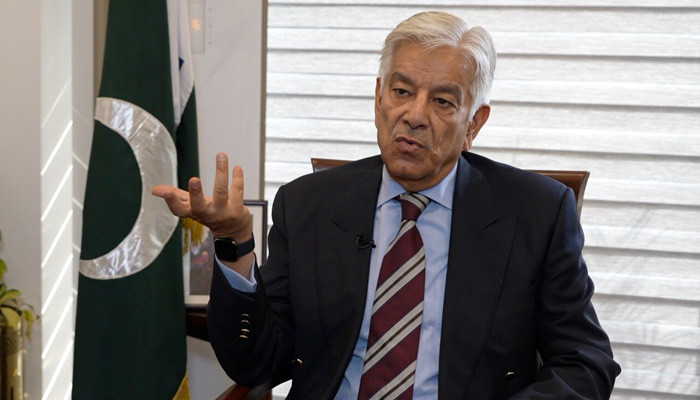 ISLAMABAD: Defence Minister Khawaja Mohammad Asif Wednesday said that it is possible that elections are held before the appointment of the new army chief, due in November.

In an interview with BBC Urdu, Khawaja Asif said: “It is possible that the caretaker setup will leave before November and a new government is formed in the county.”

“Chief of Army Staff General Qamar Javed Bajwa has already announced that he is not willing extension in his service.”

Welcoming his decision, the defence minister said that the army chief’s statement has closed the doors on speculations and rumours. He maintained that the former army chief General (retd) Raheel Sharif, too, had never “directly or indirectly demanded an extension”.

It is worth mentioning that Gen Bajwa will remain in office till November 2022 after his three-year extension granted in 2019 by the then prime minister Imran Khan is set to expire.

Lashing out at the PTI-led government, the defence minister said that Imran Khan wanted to bring an army chief of his choice to protect his political interests and the continuation of his rule in the country.

Responding to a question, Khawaja Asif said that his government was not toppled down to stop his interference in the process of appointing the new army chief.

He maintained that it is the discretion of the prime minister to select one of the names sent by the army. The minister admitted that Khan is a “popular leader” but he has failed to deliver. He is playing the religion card and propagating his anti-US narrative.

Asif further added that the establishment thought he [Imran Khan] is new in the politics and will bring “freshness” to the politics of Pakistan.

He, however, added that this experiment harmed the country.

Taking a jibe at the PTI chairman’s statement regarding the institutions becoming neutral, the defence minister said: “Now, the neutrality does not suit Imran Khan.”

Terming Imran Khan’s anti-establishment statement “shameful”, Asif said: “He wants to stay in power and institutions to provide him with crutches.”

“For the last four years, everything has been revolving around one person.”

“I agree with the DG ISPR that the army cannot defend itself on public platforms,” he was quoted as saying.

The federal minister assured that they [coalition government] will defend the neutral role of the establishment.

Calling Imran Khan “paranoid”, he said that the way Imran Khan is attacking the army hasn’t been done before.

Referring to the country’s deteriorating economic condition, Khawaja Asif said that taking the government in this situation was a “big political risk”.

“I don’t think someone push us, we jumped ourselves,” he added.

The minister said that the country would have suffered irreversible damage if Imran Khan remained in power for another 14 months.

“Imran-led government was heading towards failure,” he added.

People around Imran Khan were accumulating wealth, the minister alleged, adding that Imran’s financial background is also very bad but he will not go into the details.

‘No change in Pakistan’s position on Russia- Ukraine war’

Responding to another question, the minister said that neither demand for military bases is on the table nor will Islamabad accept such demand.

Criticising the West for its dual standards, Khawaja Asif said that Europe should raise its voice for the people of Kashmir and Palestine just as it did for Ukraine.