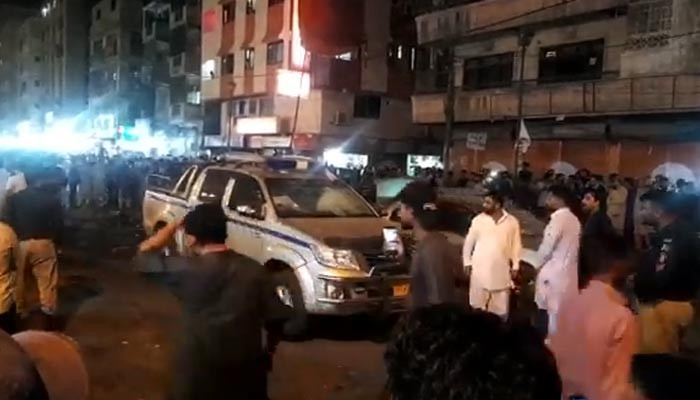 A blast in Karachi’s  Saddar area has killed one person and has left 13 people injured, Geo News reported Thursday.

Deputy Inspector General (DIG) South Sharjeel Kharal said that the blast also damaged several cars and shattered the windows of nearby buildings, adding that the nature of the blast is being probed.

He added that the injured have been shifted to Jinnah Hospital.

An emergency has been imposed in all public hospitals of Karachi, while sources at the Jinnah Hospital said that the condition of four individuals is serious.

Hospital sources added that the people brought to the hospital have sustained injuries caused by ball-bearings.

Administrator Karachi Murtaza Wahab reached Jinnah Hospital to inquire after the injured of the blast, where he was given a briefing regarding medical treatment being given to the injured.

Murtaza Wahab directed the administration to ensure the best medical facilities for the injured.

Information Minister of Sindh Sharjeel Inam Memon visited the site of the blast and vowed to arrest the culprits.

“There is a terror threat not only in Karachi but across the country,” said Sharjeel Memon, adding that, “in the past terrorist were traced out too, therefore, those responsible for the blast will not be spared.”

Sharjeel Memon went on to say that last month a suicide blast occurred at Karachi University, however, it’s too early to establish a link between the two.

Sindh Information Minister further stated that neither a person nor any institute was targeted in the blast, however, there was no threat of blast at any particular place.

According to the initial report submitted to Chief Minister Sindh Murad Ali Shah upon his instructions, it is suspected that the explosive material was implanted in a motorcycle near a garbage dump, while the blast occurred near the United Bakery.

Meanwhile, sources told Geo News that a vehicle belonging to the Coast Guard was targetted as the vehicle was parked near the site of the blast.

Sources added that all the individuals in the vehicle, as well as the driver, are safe.

On the other hand, DIG South said that no specific vehicle or institution was targetted in the blast.

According to the Bomb Disposal Squad (BDS) officials, explosive material used in the blast was made locally and it was planted in the carrier of the bicycle.

As per BDS, about 2-2.5-kilogrammes of explosive material were used in the blast.

“Explosive material consisted of ball-bearings and blast was carried out using a time device,” said BDS.

Following the blast in Karachi, PM Shehbaz expressed grief and offered condolences to the bereaved family. He, in a statement, prayed for the speedy recovery of the injured.

Foreign Minister and Chairman PPP Bilawal Bhutto Zardari condemned the blast and expressed sorrow over the loss of a precious life.

MQM-P convener Khalid Maqbool expressed concern over the Karachi blast and extended his condolences to the families of the injured and deceased.

Punjab Chief Minister Hamza Shehbaz, in a statement, condemned the blast and expressed grief over the loss of life. The PML-N leader also prayed for the early recovery of those injured.