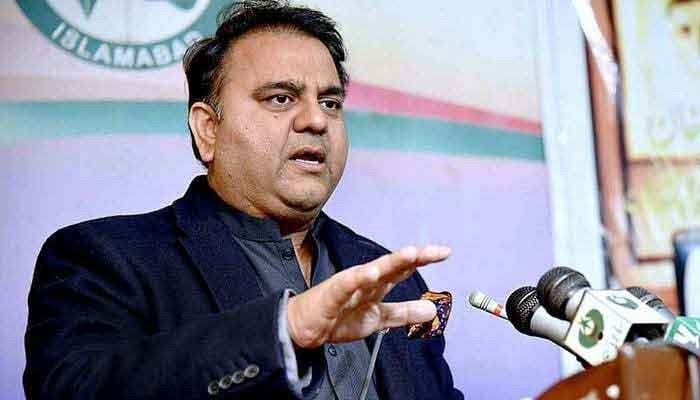 LAHORE: A day after the Supreme Court verdict on Article 63(A), former information minister Fawad Chaudhry announced on Wednesday that the PTI will file a petition for the removal of Hamza Shehbaz as the chief minister of Punjab.

The former information minister said that Hamza Shehbaz was an “illegal chief minister” in view of the Supreme Court’s verdict on voting against party lines. He also hoped that the court dismisses the chief minister of Punjab.

“Would like to tell chief secretary and IG that times have changed,” said Fawad, adding that Punjab Assembly Speaker Pervaiz Elahi, who is the PTI’s candidate for chief minister, has said that he would accept any decision taken by Imran Khan.

The PTI leader said that the party was of the view that whoever becomes chief minister of Punjab should dissolve the provincial assembly.

The former information minister also claimed that there was no government throughout the country and added that a “strong and stable Pakistan was handed over to the incumbent incompetent government”.

Fawad also said that the incumbent government had ruined the country.

The PTI leader said that President Arif Alvi may ask Prime Minister Shehbaz Sharif to take a vote of confidence at “any point”, adding that the premier did not have 172 votes to survive such a motion.

“We want to move towards elections,” said Fawad, adding that the PTI is ready to hold talks on electoral reforms if they announce a date for the polls.

“Dollar has reached Rs200 and the economy has been ruined in 40 days. When the political situation improves then the economy will improve as well,” said Fawad.

Ahead of Fawad’s press conference Imran Khan held a meeting with the senior leadership of his party on the political situation in Punjab after the Supreme Court’s verdict.

The meeting talked about the political and constitutional options emerging before the PTI in view of the Supreme Court decision.

Sources said that the meeting decided to explore constitutional options against Hamza Shahbaz. They added that the PTI will decide its final action plan after ECP decides on the dissident MPAs that voted in favour of Hamza Shehbaz.

Who will win re-election for CM Punjab?

After the much-awaited judgement by the Supreme Court, which ruled that the vote of defecting lawmakers should be discarded, there is much confusion in Punjab.

Shehbaz won against PTI’s candidate Parvez Elahi with 197 votes, but to bag the chief minister’s slot, he had to secure the vote of 25 members of the provincial assembly (MPAs), belonging to the PTI, who crossed the aisle.

If the votes of these 25 PTI MPAs are discounted, in re-election for the chief minister of Punjab, does Shehbaz still emerge successful?

At present, PTI and Elahi’s PML-Q have 193 MPAs in the Punjab assembly. Minus this number the 25 rebels and Elahi is left with 168 votes.

On the other side is Hamza Shehbaz. His party, the PML-N, with the help of the PPP, has a total of 173 MPAs. But minus this, the four dissident PML-N MPAs are unlikely to vote for Shehbaz.

That leaves the current chief minister with 169 votes.

So far Hamza Shehbaz seems to be winning with one vote. Simple enough?

In the 371-member Punjab assembly, there are also four independent MPAs, namely: Chaudhry Nisar, Ahmad Ali Aulakh, Qasim Langah, and Bilal Warraich. And then there is the chief of his own party, Muavia Azam Tariq.

It is likely that these five men will be one of the deciding factors in the race for chief ministership. But it gets a little more complicated than this.

As per the rules of the Punjab Assembly, the chief minister is elected with a simple majority, therefore 186 votes out of the 371-seat assembly. But if no candidate secures the votes of a majority of the total membership for the assembly in the first round then the second round of voting is held.

In this round, the member who secures the most votes, from amongst the members present that day, will win.

So, how many MPAs will show up on the day of the re-election?