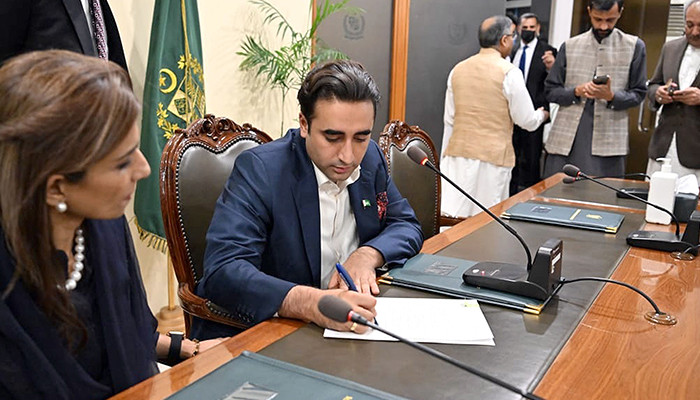 ISLAMABAD: Foreign Minister Bilawal Bhutto-Zardari will travel to New York on a two-day official visit next week at the invitation of US Secretary of State Antony Blinken, the Foreign Office said Monday.

Bilawal is visiting New York for the ministerial meeting on the “Global Food Security Call to Action” to be held at the United Nations on May 18, 2022.

According to the Foreign Office, the meeting will bring together a regionally-diverse group of countries, including those most affected by food insecurity and those in a position to take action to address it.

“Ministers will be invited to speak on humanitarian needs and longer-term development efforts required to save lives and build resilience for the future,” the statement issued in this regard said.

During his trip, the foreign minister will also participate in the Open Debate of the UN Security Council on “Maintenance of International Peace and Security – Conflict and Food Security” under the US Presidency of the Council on May 19.

The foreign minister will highlight Pakistan’s perspective and policy priorities in the two meetings.

While in New York, Bilawal will have other important engagements on the sidelines, including a bilateral meeting with US Secretary of State Antony Blinken.

“Pakistan will continue to play a proactive role in supporting the international efforts to advance the shared objectives of a peaceful and stable world free of conflict, poverty, and hunger,” the statement read.

In a separate statement, the Foreign Office mentioned that Bilawal is visiting the UAE, today to offer condolences to the Al-Nahyan family, the leadership and the people of the UAE, on the passing away of His Highness Sheikh Khalifa bin Zayed Al Nahyan, fromer president resident of the United Arab Emirates.

“In the demise of Sheikh Khalifa, the UAE has lost a visionary and statesman, who profoundly transformed the country,” the Foreign Office noted.

Pakistan has also lost a sincere friend and partner who made invaluable contributions toward strengthening fraternal ties between the two countries.