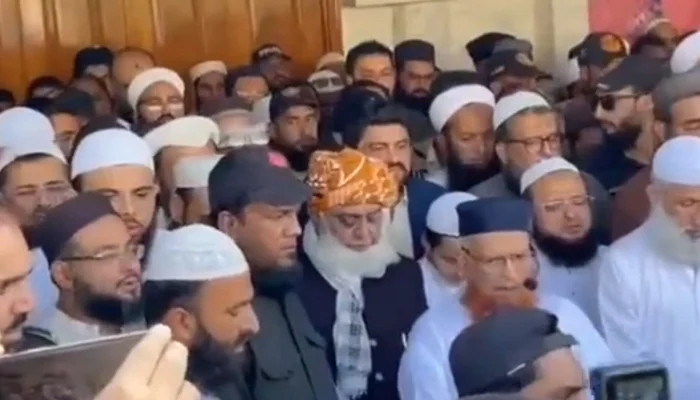 KARACHI: Pakistan’s Grand Mufti Maulana Rafi Usmani’s funeral prayers were offered today in the port city who passed away on Friday at the age of 86.

Mufti Usmani was the mufti-e-Azam of Pakistan, president of Jaamiyah Darul Uloom, Karachi, and a renowned Islamic scholar.

His funeral prayers were led by his brother Maulana Taqi Usmani — who is a renowned religious scholar and Islamic university’s vice president. The prayers were attended by Sindh Governor Kamran Tesori, Maulana Fazlur Rehman and a large number of people.

The deceased scholar will be laid to rest in the compound of Jaamiyah Darul Uloom, Korangi, between the graves of his father, former grand mufti Shafi Usmani, and mother.

Mufti Rafi Usmani was born in the United-India’s Deoband town on July 21, 1936. He was also the patron of the Wifaq ul Madaris Al-Arabia, Pakistan.

He was associated with teaching and academic activities at Darul Uloom Karachi, which was founded by his father Mufti Shafi Usmani.

The religious scholar was appointed as Mufti-e-Azam by the clerics and scholars representing the Deoband school of thought in 1995.

Mufti Rafi Usmani assumed the office of the seminary’s chief in 1986 and served it till his demise.