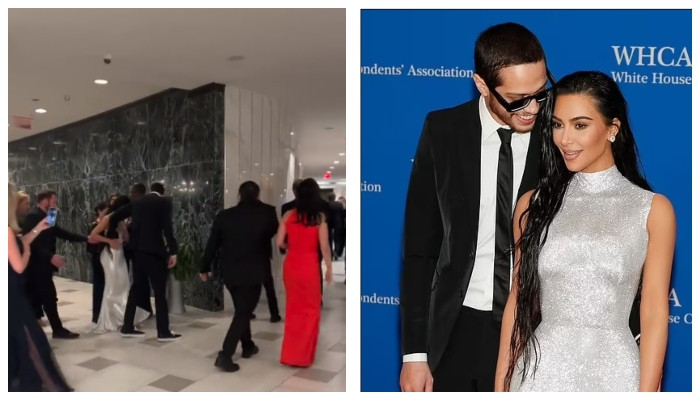 Kim Kardashian’s fans reacted after Pete Davidson saved his sweetheart from embarrassment during their grand entry at the White House correspondents’ dinner on Saturday.

A  leaked video shows the 41-year-old reality star making her way through the crowd with beau Pete and taking an unfortunate stumble.

The SKIMS founder and the Saturday Night Live star, 28, looked amazing as they made their way through the crowd, but a fan captured the moment she seemingly stood on her dress and lost her way slightly.

In the video clip, the Keeping Up with the Kardashians alum can be seen grabbing her man’s hand to compose herself before making their way around the corner and pretending it didn’t happen.

The user captioned the video post: “Everybody shut up Kim almost fell.”

And fans were quick to share their delight at the mishap in the comments section.

One user replied: “Aww I think someone accidentally stepped on the train of her dress. She handled it well, I would have fallen flat on my a**.”

Another wrote: “The guy behind her is trying to take her down.”

A third said: “My back hurts just watching that,” while a fourth commented: “Awww Pete helping her that’s so cute! Everyone talking s*** all shocked that she’s so rigid about her public image… wonder why!”