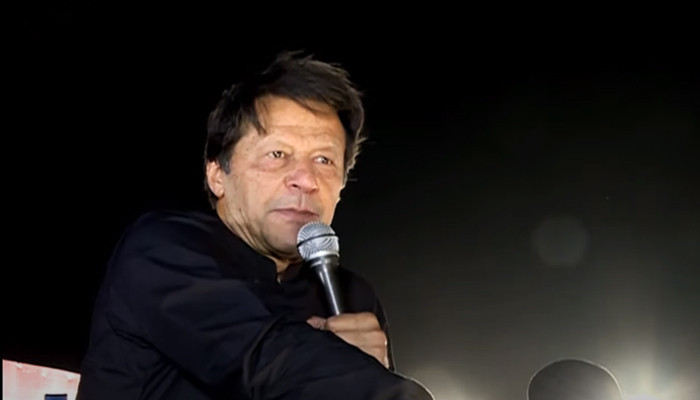 JHELUM: PTI Chairman Imran Khan on Tuesday said he referred to  Prime Minister Shehbaz Sharif as Mir Jaffar and not the army, adding that the British had awarded Mir Jaffar for his betrayal, just like the Americans have rewarded PM Shehbaz.

Imran Khan held a series of rallies in different cities, including Karachi, Mianwali, Lahore, and Peshawar, as he mobilises his party workers and leaders against the government ahead of the Islamabad march.

While addressing the Jhelum rally, Imran Khan said that PML-N supremo Nawaz Sharif and PML-N Vice-President Maryam Nawaz were speaking against the Pakistan Army and not him.

Lashing out at PM Shehbaz  in response to the premier’s notice of the PTI chairman’s recent Abbottabad speech, the former PM said: “But you, Shehbaz Sharif, are saying that I am speaking against the army?”

The PTI chairman said that PTI and the country’s armed forces were the two things keeping Pakistan together.

Berating the PML-N leaders, the ex-prime minister said during his tenure, Indian Prime Minister Narendra Modi did “not dare” to speak against Pakistan’s army.

“Did Nawaz Sharif or Shehbaz Sharif ever speak on Kashmir?” the PTI chairman questioned, as he mentioned that during his visit to Russia, he had asked President Vladimir Putin for providing Pakistan oil at a cheaper rate.

Khan said the Russian president had “agreed” to provide oil at a 30% cheaper rate to Pakistan, “but will Shehbaz Sharif dare to buy the oil from Russia?”

The PTI chairman said America does not meddle in India’s affairs — despite it buying oil from Russia — as New Delhi has an independent foreign policy. “But slaves cannot stand up for the nation.”

‘Convicts’ to leave for London to meet ‘coward’

The ex-prime minister lashed out at the government and said the federal cabinet — comprised of “convicts” — would visit London to meet a “coward” — PML-N Nawaz Sharif.

“Nawaz Sharif is a coward and a thief who flees abroad whenever he gets the chance,” Khan said, as the prime minister, cabinet members, and PML-N leaders are set to leave for London, with sources saying that “a big decision” is on the cards.

As Information Minister Marriyum Aurangzeb termed it a “private” visit, Khan said that during his 3.5 years in office, he did not leave the country for a “single private visit”.

“Nawaz Sharif went abroad for 24 private visits and Asif Zardari 50,” the PTI chairman said, asking the government to place his name on the Exit Control List (ECL) as he has no plans of leaving Pakistan.

The PTI chairman reiterated US Under Secretary Donald Lu told Pakistan’s ambassador that if Khan were to be removed from the prime minister’s office, then “everything will be forgiven”.

“He said that if [I] am not removed, then Pakistan will face grave consequences,” the PTI chairman told his party workers, adding that following this, a “conspiracy” was launched to remove him from office.

The PTI chairman said when “cherry blossom” was placed as the prime minister, the nation “rose” against that government.

Taking a jibe at JUI-F chief Maulana Fazlur Rehman, Khan said that he was of the view that his party would take up a ministry related to education.

“But [his party] took up the ministry of communications which develops streets and highways — and through it, they will make [illicit] money,” Khan said, as he referred to Maulana Asad Mehmood, who is Fazl’s son and the minister of communications.

The ousted prime minister added that he aims to bring 2.5 million to Islamabad as the nation had “risen” against the “imported government”.

‘Why did PM call NSC meeting twice if threat letter was false?’

Before Imran Khan’s address, PTI Vice-Chairman Shah Mehmood Qureshi spoke to the participants of the rally and said that PM Shehbaz used to say he would stand with Khan if the “threat letter” turned out to be true.

The former minister said that PM Shehbaz termed the threat letter false. “Why did PM Shehbaz call the National Security Committee (NSC) meeting twice if the letter was false,” he questioned.

Asking Foreign Minister Bilawal Bhutto-Zardari if he made any statement regarding India’s denial of the Indus Basin Treaty, Qureshi said that the country is facing a water crisis.

He further said that Punjab Chief Minister Hamza Shehbaz’s government is about to end. “These 25 turncoats will be sent to their homes and so will you [Hamza],” added Qureshi.