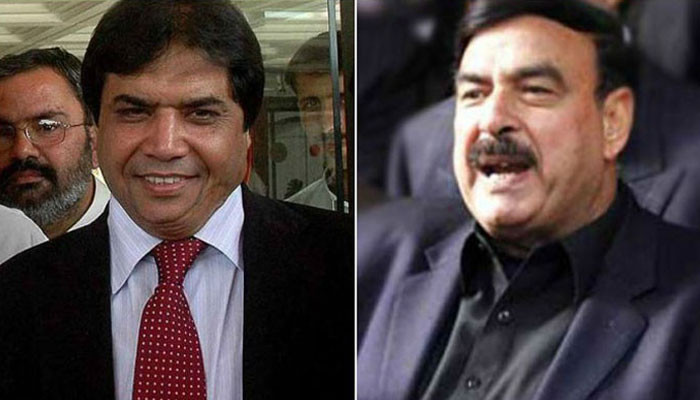 The development comes days after the newly appointed SAPM had announced a reward of Rs50,000 to anyone who brought him Rashid’s wig, a statement over which PPP Secretary General Farhatullah Babar had expressed concern.

At the outset of today’s hearing, Justice Athar Minallah called Sheikh Rasheed to the rostrum and expressed his annoyance over allegations hurled against the courts in public gatherings [by the PTI leadership].

He said, “Political statements are made that the courts are opened on someone’s directions.” It is said in the public meetings every day why the courts opened at midnight, he observed.

Justice Minallah said that the courts are open to everyone and asked the former minister not to undermine people’s trust in the judiciary by political statements.

The IHC chief justice instructed him to ask Imran Khan if he does not have confidence in the judiciary. “I will excuse myself from hearing your cases and refer them to other judges.”

Issuing notices to the federation through the secretary cabinet division and Hanif Abbasi in the case, Justice Minallah remarked: “Justice should be done and it must also be seen to be done.”

“It is said in the public gatherings that the courts are not independent, the judge observed and remarked that PTI might not have confidence in courts.

In 2014, a court had ordered to release PTI’s arrested workers at 11 pm, Justice Minallah said while reacting to the party’s allegations.

As per the rules, the courts can take up any case at any time, noted the judge. Justice Minallah, however, rejected the plea to stop Hanif Abbasi, who was convicted in the ephedrine quota case, from working as SAPM immediately.

Meanwhile, he adjourned the hearing till May 17.