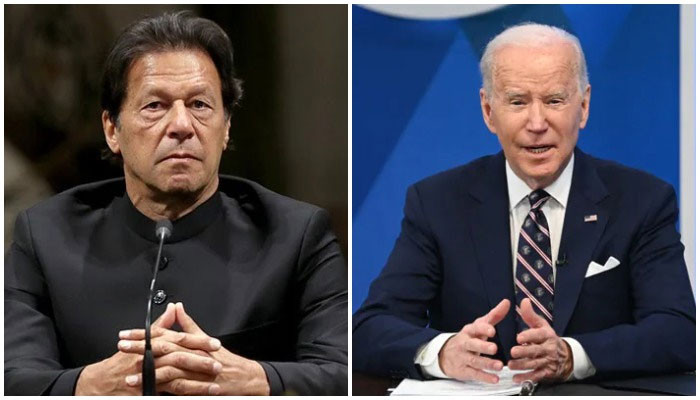 ISLAMABAD: Former prime minister Imran Khan — who was ousted through a no-confidence motion — openly called out the Biden administration for its involvement in a “regime change conspiracy” in Pakistan.

Since the last few months, ex-prime minister Imran Khan repeatedly blamed the US for backing the no-confidence motion — that lead to his ouster on April 10 — and has refused to accept the newly-elected Prime Minister Shehbaz Sharif, saying “there can’t be any bigger insult to this country”.

But the Joe Biden administration denied any role in the process.

Khan, in a tweet, asked the Biden administration whether its involvement in the “regime change conspiracy” had lessened or increased the anti-American sentiment in Pakistan.

“My question for the Biden Administration: By indulging in a regime change conspiracy to remove a democratically elected PM of a country of over 220 [million] people to bring in a puppet PM, do you think you have lessened or increased anti-American sentiment in Pakistan?” the PTI chairman said.

The incumbent government officials have repeatedly said that Khan is blaming America for his ouster as he had failed to deliver during his tenure, but the PTI chairman remains adamant that the US, in collaboration with the then-Opposition, was behind his ouster.

In a press conference last month, the PTI chairman claimed the Joe Biden administration official told Pakistan’s ex-ambassador to the US that Khan would have to be removed through a no-confidence motion.

Khan had said although some people here were unaware of the “conspiracy”, the person sitting in London, PML-N supremo Nawaz Sharif, his brother PM Shehbaz, and PPP co-chairman Asif Ali Zardari was all part of it.

“They were all hand-in-hand in this conspiracy,” he had said.

To intensify his anti-government campaign, Khan had last week in a video statement asked his supporters to start preparing for the party’s long march to Islamabad, as the PTI will not accept the “imported government”.

He had added that the PTI would begin the anti-government march towards Islamabad in the last week of May.

“We will be giving this call to all Pakistanis, not just PTI supporters, as Pakistan has been insulted after the country’s most corrupt people were imposed on us by a foreign power,” Khan had said.

Khan had said he believed that a sea of people will storm Islamabad and give a clear message to the people: “From now on, no one from abroad can impose a corrupt government on us. Pakistani people will decide Pakistan’s fate.”