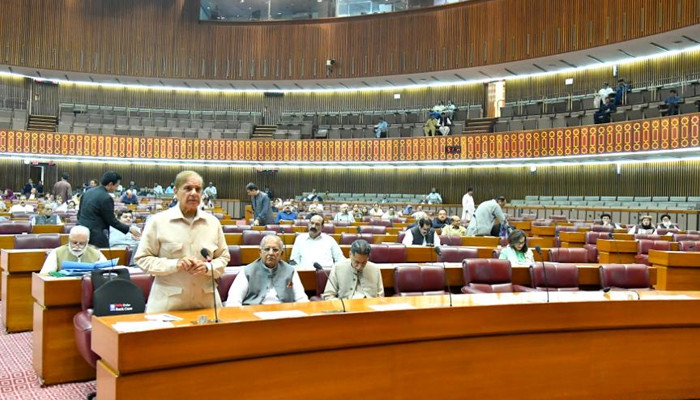 “The nation has been divided as Khan repeatedly called [the then-Opposition and now government] thieves and dacoits,” PM Shehbaz said while speaking during the first regular session of the National Assembly since the new government’s formation.

“There can be nothing [wrost] than the words he used for the institutions in his speech,” the prime minister said, slamming Khan for spewing venom against the institutions, which was tantamount to “treachery”.

The prime minister warned that if Khan was not stopped from criticising the institutions, Pakistan would soon become like Syria and Lebanon, where an anarchic situation has unfolded.

PM Shehbaz added that the institution which Khan is targetting had “pampered him like a child” and he was “their favourite when he was in the government.”

“I want to tell this house that this institution has not supported any government or prime minister in the last 75 years like it supported Imran Khan Niazi,” PM Shehbaz said as he criticised the PTI chairman for failing to deliver.

‘No mention of treachery’

Quoting ex-ambassador to the United States Asad Majeed Khan — whose meeting with American officials was termed a “threat” by Imran Khan — PM Shehbaz said that the ambassador “wrote in the letter that they used a threatening tone, but there was no mention of a conspiracy.”

Ex-prime minister Khan repeatedly blamed the US for backing the no-confidence motion — that lead to his ouster — and has refused to accept the newly-elected premier, saying “there can’t be any bigger insult to this country” — but the Joe Biden administration denied any role.

The prime minister also mentioned that the National Security Council (NSC) meeting’s statement was very clear in this regard, and it did not mention any conspiracy against Khan’s government.

Shehbaz mentioned that in the past, US, Russian, and Indian governments had threatened Pakistan, but that did not mean that a country was conspiring against Islamabad.

The prime minister said the previous government did not import oil and gas on time, resulting in a power crisis. He also blamed them for importing expensive gas, which caused a “huge loss” to the national exchequer.

PM Shehbaz said berated the PTI government for keeping some powerplants shut, which were gradually opening now, and resultantly, there was a slight decline in load-shedding.

The prime minister noted that the Rs5,500 fiscal account deficit was historic, and in the 3.5 years that the PTI government was in power, it took massive loans but did not work on development.

“The next generation has been mortgaged, there can be nothing more unfortunate than this,” the prime minister said, lamenting the uphill economic challenge his government faces.

But the prime minister said he will take notice of the electricity crisis and respond to the house in this regard soon.

“I am not in favour of dragging some things into politics. This person [Khan] is on a quest to destroy the institutions responsible for the country’s safety,” the defence minister said.

The defence minister, claiming that the PTI chairman creating hurdles for the institutions to perform their duties, said Khan has not even mentioned a “single” thing regarding his performance in any of his recently held rallies.