HomePAKISTANImran Khan was trying to turn every institution into his tiger force,...
PAKISTAN

Imran Khan was trying to turn every institution into his tiger force, alleges Bilawal Bhutto-Zardari 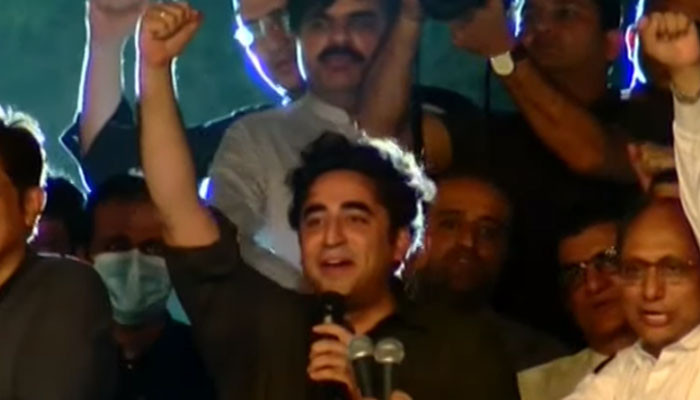 Addressing a crowd upon his arrival in Karachi for the first time since joining Shehbaz Sharif’s cabinet, the PPP chairman congratulated his supporters — referred to as jiyalas — for their victory in removing the PTI government from power.

“Democracy has won, all four provinces have won. We have sent the selected, puppet and incompetent prime minister home,” said Bilawal.

The PPP chairman, who is the foreign minister in Shehbaz Sharif’s cabinet, said that his jiyalas are “always successful” when they come out for the protection of the Constitution and take on the dictator of the time. He added that his supporters started their movement when Imran Khan came to power.

“We were standing against this undemocratic person since day one. We looked into his eyes and said you were not elected but selected. We faced injustice but did not sell our principles,” said Bilawal.

The PPP chairman went on to say that when he began his long march, he asked Khan to dissolve the assembly but he was under the influence of power and did not listen to the then Opposition.

Bilawal said that the then Opposition submitted the no-confidence motion against Khan when his caravan reached Islamabad.

“We used democratic means to send an undemocratic person home,” said Bilawal and added that the PTI chairman’s government was removed as part of the democratic process compared to what he claimed was a foreign conspiracy.

The foreign minister said that Khan’s removal from power was not a foreign conspiracy but a win for political workers, adding that Khan’s ouster was a victory of the Parliament, the Constitution, and democracy.

“White House did not conspire against you but the Bilawal House did,” said the PPP chairman while referring to his residence.

Bilawal said that members of the current government “forgot” their “political differences and formed” the Pakistan Democratic Movement (PDM). He said that the PPP convinced the allied parties not to leave the Parliament and send Khan home via the no-confidence motion.

Continuing his tirade against Khan, Bilawal said that the former government stole people’s jobs and instead of ending corruption, it broke all records of corruption.

“The coward would not even come and stand in the Parliament. Khan attacked the Constitution while running away from the no-confidence motion,” said Bilawal, adding that the PTI chairman is running a

“why was I not saved movement”.

“What kind of a prime minister was he as he ruined the economy during his tenure. He emptied the treasury and left an economic crisis to torture people,” said Bilawal.

The foreign minister also said that the former premier “isolated the country for the sake of his ego” and harmed Pakistan’s foreign policy.