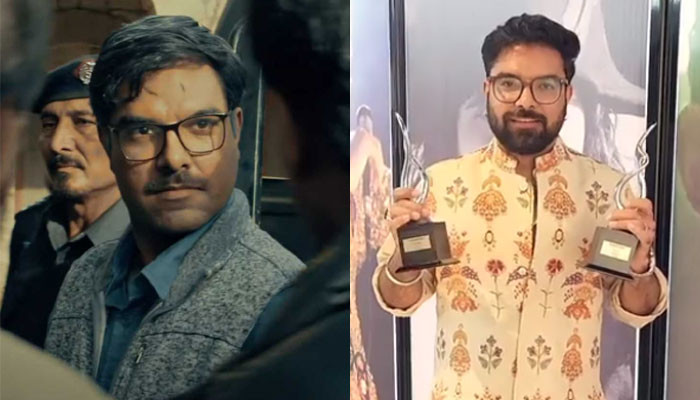 Yasir Hussain’s film Javed Iqbal: The Untold Story of a Serial Killer wins big at the UK Asian Film Festival despite getting banned in Pakistan.

Hussain bagged the Best Actor award for his performance in the leading role whereas the director of the crime thriller Abu Aleeha received award for the Best Director.

In his winning speech at the festival, the Lahore Se Aagey actor emphasized on the importance of talking about mental health.

The 38-year-old actor said, “It is now high time that we should talk about mental health and these kind of scripts.”

“Thank you very much UK Asian Film festival for choosing this film as the opening film of the festival,” Hussain added.

Expressing his gratitude for the makers of the film, he stated, “I would like to thank producer Javed Ahmed, and specially Abu Aleeha the writer and director of the film.”

“And my wife for supporting me as choosing these kinds of roles in Pakistan is very hard,” the actor said for his better half Iqra Aziz.

“One for me as the (best actor) and one for my director @abualeeha – (best director) Alhamdulillah. Thankyou @ayesha.m.omar missed you,” he added.

Earlier, Hussain has announced that his movie based on the life of Iqbal, who kidnapped, sexually abused and killed more than 100 children in Lahore during the 90s, will be premiered at the festival.

He wrote on the photo sharing app, “It’s a matter of great pride that UK Asian Film Festival is honouring our movie but, unfortunately, our own people do not recognise the local talent or content.”