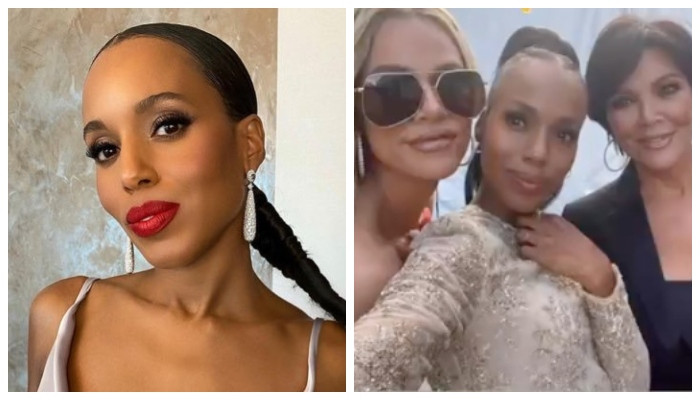 Kerry Washington shared a stunning picture with Khloe Kardashian and Kris Jenner and has sent the internet into a meltdown.

Kerry seems to be a fan of Kardashains as she ‘happily posed for a selfie with Khloe and Kris at a Disney event and called herself a ‘Kardashian.

The trio met at the Disney Hulu Upfront event held in New York City for which, Khloe was seen sporting a stunning look as she wore a turquoise dress off-shoulder dress.

The event saw several celebrities coming together who have been working on shows for the Disney platforms. Kerry spoke at the event about starring in an ABC afterschool special as a kid and many years landing up her Scandal role. “I’ve just been so lucky to call this place home,” she said.

The actress further spoke about her upcoming project Reasonable Doubt which costars Emeyatzy Corinealdi alongside her. She referred to it as “a sexy new legal drama.”

As for The Kardashians which has currently become Hulu’s biggest show were also among the attendees. The duo represented their family at the promotional event while hyping up the new show, The Kardashians, which is currently airing its’ first season on the streaming network.

The selfie shared by Kerry  was later re-shared by Khloe on her Instagram story as well. Among other celebrities spotted having fun at the event included Dwayne Johnson, Only Murders in the Building stars Selena Gomez, Martin Short and Steve Martin. As for Washington’s selfie with Khloe and Kris, the actress is known to be close to the family members and has also been a fan of the show.