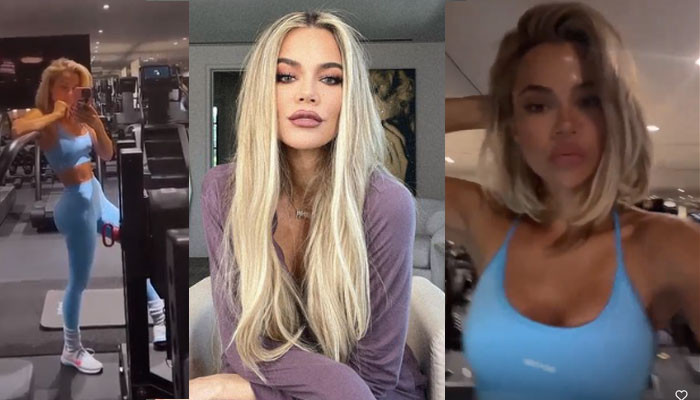 Khloe Kardashian has wowed fans with her new stunning video, showing off her incredible fit and slim figure while enjoying work-out session.

The 37-year-old  reality star’s  eagle-eyed fans spotted that she looked skinnier than usual, and even wondered whether she had had surgery to make her bum look smaller.

Her latest video sparked reactions on social media as some lauded the star for stunning fitness while others alleged her of surgery.

Khloe famously delved into an intense fitness regime several years ago, sharing her progress on social media and releasing the 2015 book Strong Looks Better Naked, detailing her journey to become her best self. The star also became host of the controversial body transformation TV show Revenge Body with Khloé Kardashian.

And this year, with her fitness journey becoming more intense than ever, fans have expressed concerns that the star is becoming too thin.

Reacting to an earlier Instagram story posted by the star, one fan asked on Twitter : “Did Khloe have her ***tt taken out?” Meanwhile another commented on a post uploaded to the star’s feed: “This is too much Khloe.”

Share
Facebook
Twitter
Pinterest
WhatsApp
Previous article
‘Drake ‘saw’ a future with Rihanna,’ how he felt about Riri’s pregnancy – deets inside
Next article
Ellen DeGeneres calls herself ‘an emotional mess’ as talk show comes to an end