HomeENTERTAINMENTKim Kardashian and Pete Davidson try to hide their face as they...
ENTERTAINMENT 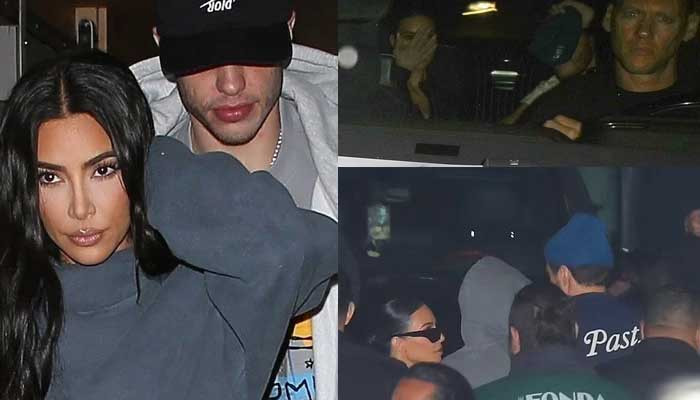 Pete Davidson and Kim Kardashian kept a low-profile on Thursday night as the lovebirds  made a hasty exit from LA’s Fonda Theatre following filming of the comedian’s show.

Pete appeared keen to make a quick and discreet getaway with his sweetheart Kim as the duo climbed into a waiting car.

The 41-year-old reality star made to cover her face with her hand while the comedian, 28,   used his blue beanie hat to shield his features as they got into car.

The funnyman  made his return to the stage for the first time in three years on April 28 when he appeared at Netflix Is A Joke: The Festival at the Hollywood Bowl.

The two were  surrounded by a plethora of security guards, photographers and other personnel as they left the theatre.

Pete  was seen to peel off his navy sweater and sit in his white T-shirt as the couple shared a giggle in the backseat.

The Saturday Night Live star had earlier unveiled new material referencing his hectic personal life and relationship with Kim, including his feud with her ex Kanye West.

The comedian also compared West’s social media attacks to the slap Chris Rock received from Will Smith at the Academy Awards in March.

During the first night of the comedy festival, which had sold out the Hollywood Bowl, Pete opened with material about how West had told him that he had AIDS.