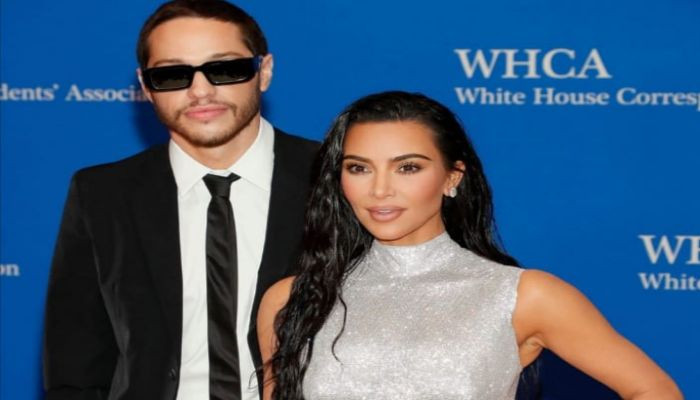 Kim Kardashian and Pete Davidson  made their red carpet debut at the  White House Correspondent’ Dinner.

The royalty TV star  is dating  the SNL comedian   after   split from former husband Kanye West.

The White House press corps association, the WHCA, has hosted presidents for an annual black tie dinner starting with Calvin Coolidge in 1924.

But the televised Washington social juggernaut — beloved by some, maligned as cringe-worthy by others — shuddered to a halt under the twin impacts of Donald Trump’s media-bashing presidency, then Covid-19.

So to gather 2,600 invitees at the Washington Hilton, scene of the 1981 assassination attempt on Ronald Reagan, offers a restorative return to the familiar, with President Joe Biden on hand to hear himself being roasted by Daily Show host Trevor Noah.

Some dub the WHCA get-together the “Nerd Prom,” referring to the giddy excitement of often less-than-glamorous journalists as they mix it up for a night with the rich and powerful.

While peak glitz was under Barack Obama’s Hollywood-connected presidency, Saturday’s version will feature guests including Kim Kardashian, an opening video skit by British comedian James Corden and a raft of competing after-parties.