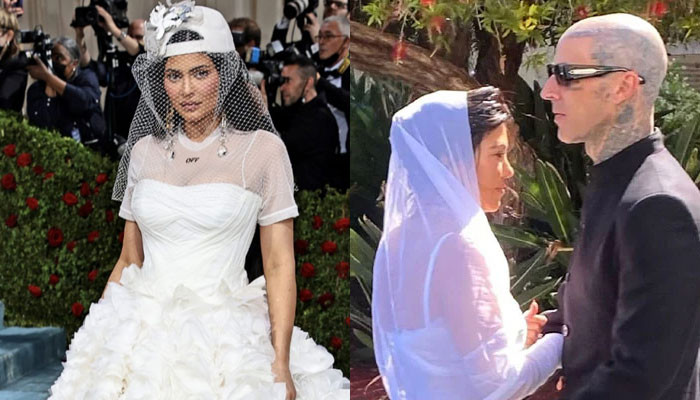 Kourtney Kardashian walked down the aisle with Travis Barker in Santa Barbara while Kylie Jenner jetted off to Las Vegas to attend Billboard Music Awards (BBMAs) over the weekend.

The Kylie Cosmetics mogul oozed her charm in a silver dress at the star-studded event on Sunday alongside her on-off beau Travis Scott.

Jenner arrived at the award show to shower her support over the 31-year-old rapper who was returning to the mega event after the Astroworld tragedy.

The lovebirds were also accompanied by their four-year-old daughter Stormi.

Meanwhile, Jenner’s older sister took her wedding vows with the Blink-182 on the same day.

Kardashian, who shares three children with ex-boyfriend Scott Disick, has never married before while Barker was previously married to Melissa Kennedy from 2001 to 2002 and then Shanna Moakler from 2004 to 2008.

“Kourtney Kardashian is a married woman – she just tied the knot with Travis Barker, and this time, they’re truly man and wife in the eyes of the law,” TMZ reported.

“The couple said ‘I do’ Sunday in Santa Barbara, where they were spotted in the traditional bride and groom wear and exchanging vows on the steps of what appears to be the downtown courthouse there on Anacapa,” the outlet added.