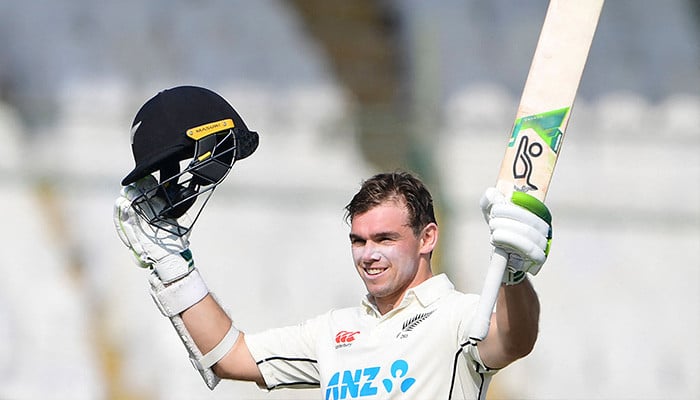 KARACHI: Tom Latham cracked a brilliant century Wednesday while fellow-opener Devon Conway missed out on one of his own by eight runs as New Zealand replied strongly to Pakistan on the third day of the first Test in Karachi.

Latham’s 13th hundred — the most by a New Zealand opener — took the visitors to 245-2 at lunch in reply to Pakistan’s first-innings total of 438.

The tourists now trail by 193 runs.

Kane Williamson, having overturned a leg-before decision against him, was unbeaten on 19, and Henry Nicholls on 10 after New Zealand resumed at 165 without loss.

He was finally dismissed for 113 after miscuing a reverse sweep and was caught in the slip.

Latham and Conway put on 183 for the first wicket, beating the New Zealand record against Pakistan of 181 set by openers Mark Richardson and Matthew Bell at Hamilton in 2001.

Conway was trapped leg before by spinner Nauman Ali for 92 after striking 14 boundaries in his fifth Test half-century.

The Pakistan camp has been hit by viral flu with neither skipper Babar Azam nor Agha Salman taking the field during Wednesday’s first session.

With Babar unavailable on day three, an issue was created on the ground on who will captain the Green Caps as wicket keeper-batter Mohammad Rizwan was stopped from taking charge.

Instead, former skipper Sarfaraz Ahmed — who made his Test comeback after four years in the New Zealand series — took over as stand-in captain.

The match referee had barred Rizwan from captaining the side as he was not part of the playing XI. Rizwan is the vice-captain of the Pakistan Test team; however, he was rested for the first Test.

Rizwan, who is the 12th man, was captaining the Pakistan side on day three of the first Test against New Zealand in the absence of Babar, before the match referee informed the team management that he cannot captain the side.

Rizwan took to the field without the skipper and was seen setting the field when the match referee informed the Pakistan team that according to the ICC rules, a 12th man could not be a stand-in captain.

Meanwhile, left-handed batter Shan Masood was late to the field due to flu. A spokesperson said Pakistan’s media manager Ahsan Nagi had also fallen victim to the flu and did not come to the stadium today.

Players have been advised to stay cautious, said the spokesperson.