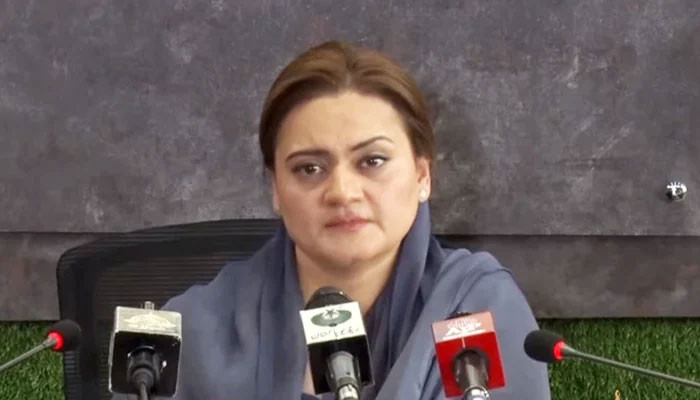 ISLAMABAD: The newly-elected Shehbaz Sharif-led government would complete its tenure in line with the Constitution, Information Minister Marriyum Aurangzeb said Saturday as speculations are being made regarding the government’s tenure.

Aurangzeb, saying that the visit was of a private nature, informed journalists at the press talk that during the London huddle, detailed deliberations were held on the rising inflation.

A split in the ruling party was also seen as PML-N Vice President Maryam Nawaz and Defence Minister Khawaja Asif had stressed on early elections, in light of the troubles that Pakistan faces on the economic front.

Imran Khan, the chairman of the country’s biggest Opposition party, PTI, has also called for snap elections as he has refused to accept the new government and vowed to march to Islamabad after May 20.

Speaking about Imran Khan’s Sialkot jalsa, the information minister said no one has prohibited PTI from holding rallies in the country and stressed that the government was “not afraid” of Khan’s hard-hitting speeches.

“Your hate-mongering speeches will benefit us,” Aurangzeb said.

The PML-N leader said the PTI and government had no issues over the venue after the party was informed of an alternate place.

The PTI earlier in the day changed the venue of its public gathering from CTI ground — a property of the Christian community — to VIP Ground in Sialkot after the community lodged a protest as the party had not taken prior permission from them for the rally.

“It was the government’s duty to give due right to the Christian community,” said Aurangzeb.

In response to Khan’s message that he would be coming to Sialkot, Aurangzeb said: “Do come, who is stopping you? Nobody is afraid of you, the people have seen your real face.”

The information minister also noted that the Opposition was targeting the government leadership and warning of a “bloody march” during their press conferences and rallies.

“If Imran Khan calls for a bloody march, then it is [Interior Minister] Rana Sanaullah’s responsibility to ensure the public’s safety,” Aurangzeb stressed. “Nobody has the right to hold a bloody march.”

Giving a message to the people going to PTI’s rallies, Aurangzeb told them that Khan “lies” and that they should refrain from attending the party’s rallies.

“Imran Khan is incompetent, he made false promises of jobs to the youth,” she said, adding that the PTI chairman had damaged the country’s tradition of decency.

Aurangzeb said the current condition of the economy was not due to the present government as the falter began during Khan’s tenure. “He gave illegal subsidies.”