My campaign is jihad, not political: Imran Khan 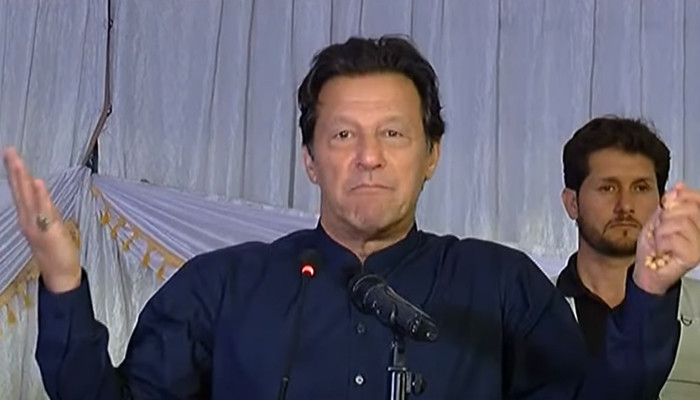 ISLAMABAD: PTI Chairman Imran Khan said Monday his campaign against the government was “jihad” and not a political move, as he lashed out at the Sharifs for being a family “liars”.

In his address to party workers, the ousted prime minister who is campaigning for PTI’s Islamabad march claimed the government wants to arrest him but warned it that all “plans” against him would backfire.

Khan said, “criminals” were sitting in the Parliament and wondered how would Pakistan progress if the “corrupt” people ruled the country. He claimed that India celebrated when the incumbent government came into power.

“I have no properties outside, I will stay in Pakistan […] I will never want something which damages my country,” the PTI chairman said, slamming the government for “having an FIR registered” against him.

Faisalabad police had last week registered a case against 150 people, including former prime minister Khan, for allegedly harassing and stopping Pakistani pilgrims from performing their rituals at Masjid-e-Nabawi (PBUH) earlier this week.

But Interior Minister Rana Sanaullah clarified last Tuesday that the government did not have a first information report (FIR) registered against the PTI chairman.

Moving on, the PTI chairman said his party only wanted one thing: early elections — which has been the PTI’s demand after their ousted as it has refused to accept the new government.

Khan told his workers that he would give the call to Islamabad after May 20 and asked the workers who could not join him in the federal capital to protest in their respective cities once the march begins.

The PTI chairman said it was incumbent on his party workers to reach out to the people, engage them, and ask them to participate in the anti-government protest.

Talking about when he was in power, Khan said overseas Pakistanis had sent unprecedented remittances and had it not been for their money, the country would have defaulted.

“Overseas Pakistanis send their money to Pakistan, and the corrupt leaders here siphon it abroad,” referring to the government leaders. “Tell me, which country’s prime minister lives in the most expensive area of London?”

The ex-prime minister said when his party came into power, the external debt was at a historic high of $20 billion. “But we brought in the most dollars and increased the exports.”

The PTI chairman said there was record agricultural growth during their tenure and unemployment was also substantially reduced. He added that his government, despite facing COVID, saved the economy.