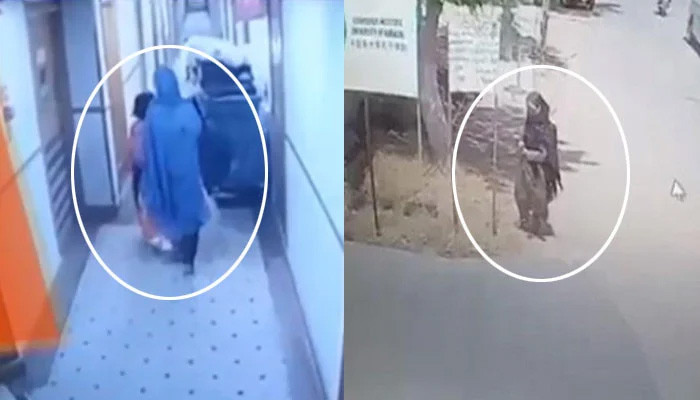 KARACHI: A new CCTV video of Shari Baloch, the female suicide bomber who had targeted Chinese teachers at the University of Karachi last month, has surfaced, said the investigation officials.

Four people, including three Chinese nationals, were killed and four others sustained injuries in a suicide attack carried out by a burqa-clad woman outside the KU’s Confucius Institute on April 26.

The sources privy to the investigations said that probably it was the last meeting between Shari Baloch and her husband. The sources added that the suicide bomber last met her husband and children at a hotel located at Shahrah-e-Faisal.

In the video, Shari Baloch could be seen with her children in the hotel’s corridor. A black colour’s bag can also be seen slung on her shoulders, which was later used in the suicide attack, the sources said.

They said that the suicide bomber reached there to hand over her children to her husband ahead of the suicide attack.

The bomber’s husband used to arrive at the hotel along with a man named Iftikhar, the sources said, citing the hotel’s record.

It is pertinent to mention that the law enforcers have yet to nab Shari Baloch’s husband whom the investigators had identified as one of the main suspects in the KU attack.

On April 28, the investigators probing the suicide bombing at the KU recovered important documents related to the suicide bomber in late-night raids at various locations in Karachi, the sources said, adding that international SIM cards reportedly used by the bomber, CNIC of her husband and other things were also recovered.

The law enforcers also raided the house of the alleged suicide bomber’s father in Scheme 33, Karachi.

Laptops and other evidence, including documents, were seized during the raid.

Meanwhile, the investigators also searched the apartment of the alleged suicide bomber in Gulistan-e-Johar block 13 and sealed it afterwards, the sources said.

They said that the apartment is rented and the bomber had been living there for the last three years.