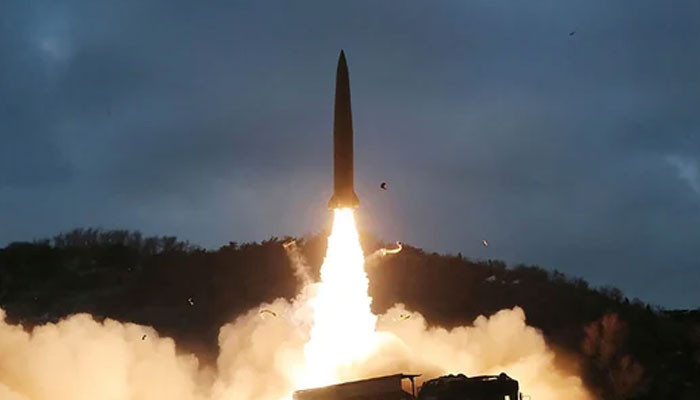 Pyongyang has conducted 14 weapons tests since January, including firing an intercontinental ballistic missile at full-range for the first time since 2017.

The Wednesday test comes days before the May 10 inauguration of South Korea’s President-elect Yoon Suk-yeol, who has vowed to take a hard line with North Korea and ramp-up security cooperation with the US after years of failed diplomacy.

The missile flew 470 km (300 miles) and reached an altitude of 780 km, the JCS said, adding it was a “blatant violation of UN Security Council resolutions.”

Japan’s state minister of defence Makoto Oniki confirmed the launch and the missile’s trajectory, saying it had landed “outside of Japan’s exclusive economic zone.”

North Korea’s “repeated launches of ballistic missiles threaten peace and safety of our nation, the region, and the international community,” he added.

Seoul’s national security council said it “strongly” condemned the launch, urging the North to “cease actions that pose a serious threat to the Korean Peninsula” and to return to dialogue.

Since high-level diplomacy with then-US president Donald Trump collapsed, North Korea has doubled-down on Kim’s plans for military modernisation, seemingly impervious to threats of more sanctions as it ignores the United States’ offers of talks.

Kim Jong Un said at last week’s military parade that he would take measures to develop “the nuclear forces of our state at the fastest possible speed”, according to footage of his speech broadcast on state media.

Repeated negotiations aimed at convincing Kim to give up his nuclear weapons have come to nothing.

“There is a good chance that they test-fired a missile that can be equipped with a nuclear warhead,” Ahn Chan-il, a North Korean studies scholar, told AFP Wednesday.

Kim also warned that he could “pre-emptively” use his nuclear force to counter so-called hostile forces at a meeting with top military brass last week.

Analysts said Kim’s messaging on his nuclear weapons, plus the recent test, could be seen as a signal to President-elect Yoon, who has threatened a pre-emptive strike on Pyongyang.

“It could be a warning message to… Yoon,” said Hong Min of the Korea Institute for National Unification.

Yoon has suggested he is only willing to talk about peace if North Korea confirms it is willing to denuclearise — something Pyongyang will never accept, Hong said.

“It could also signal Pyongyang’s stance that it has no choice but to further enhance its arsenal if Seoul and Washington decided to deploy strategic military assets to the South,” he added.

For five years under President Moon Jae-in, Seoul has pursued a policy of engagement with Pyongyang, brokering high-level summits between Kim and Trump while reducing joint US military drills the North sees as provocative.

But for President-elect Yoon this “subservient” approach has been a manifest failure.

He said on the campaign trail he would like more US missile defences — and even tactical nuclear weapons — deployed in South Korea, and has vowed to ramp up joint military exercises, which infuriate Pyongyang.

US President Joe Biden is due to visit South Korea later this month to meet with Yoon.

Other analysts said that North Korea’s testing blitz could be aimed at taking advantage of gridlock at the United Nations following Russia’s invasion of Ukraine.

It is “virtually impossible” for the Security Council to sanction North Korea — which has supported Russia’s attack on Ukraine — due to Moscow’s veto power, said Cheong Seong-chang of the Center for North Korea Studies at the Sejong Institute.

“The North therefore will try to test as many missiles as possible that it has not been able to do so far, enabling it to enhance capabilities of its arsenal at a fast pace.”