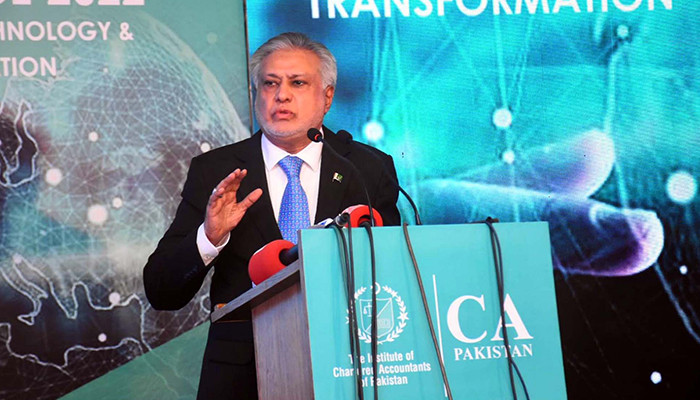 Finance Minister Senator Ishaq Dar said Friday, without naming the nation, that Pakistan would receive $3 billion from a “friendly country”.

In an interview during Geo News programme “Aaj Shahzeb Khanzada Kay Sath”, Dar assured that Pakistan would meet all the requirements of the International Monetary Fund (IMF) for the ninth review and it would default.

However, he stressed that the international money lender could not dictate Islamabad on managing its finances. Dar said he would not beg the IMF for providing loans to Pakistan and he has told the lender’s officials that “you can’t dictate; if the money doesn’t come in, we’ll manage”.

The FinMin said all the commitments with the international money lender were in order and the government has been holding weekly meetings with the Fund for the ninth review.

The News reported that Pakistan and the IMF talks are continuing on the ninth review, but both sides are yet to strike a broader agreement on a revised macroeconomic framework for the current financial year.

The lingering of the talks may delay the conclusion of the ninth review and release of the $1 billion tranche till the next calendar year 2023.

Both Pakistan and the global lender are tight-lipped and no one is willing to say anything on record but background discussions suggest that the talks were in limbo because of differences over the revised macroeconomic and fiscal framework shared with the IMF.

But the finance minister said Pakistan has met all of the Fund’s demands, but as both sides are yet to strike an agreement, the lender is “behaving abnormally”.

“However, I have never and I will never take dictations from institutions like IMF. Luckily or unluckily, IMF has been declared as the financial doctor of countries,” he lamented.

The minister’s statement comes amid Pakistan’s foreign reserves not being in an ideal condition as they can cover imports for only the next 1.6 months — and after the floods, the imports are expected to increase.

Pakistan, which has suffered flood losses worth $30 billion, is expected to receive funds from international donors, but the commitments from friendly are yet to materialise as they hang in limbo.

However, the finance minister is hopeful that Pakistan would not only meet the requirements of the IMF, but the government would also ensure that funds keep trickling into the SBP’s account.