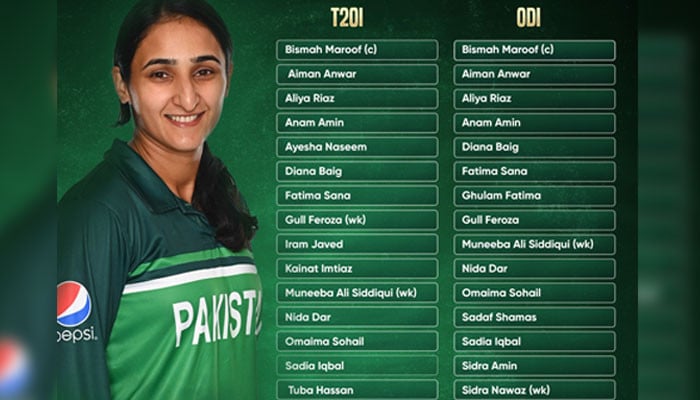 KARACHI: The Pakistan Cricket Board (PCB) on Wednesday announced women’s Twenty20 and ODI squads for the Sri Lanka series starting from May 24 in Karachi.

According to a statement issued by the PCB, two uncapped cricketers, wicketkeeper-batter Gull Feroza and leg-spinner Tuba Hassan, have been included in the T20I squad for the three-match series against Sri Lanka. The series will be played at the Southend Club in Karachi.

Meanwhile, uncapped batter Sadaf Shamas has been included in the ODI squad while Gull Feroza who hails from Multan has also earned a spot in the 15-member squad.

Bismah, Aliya Riaz, Diana Baig and Fatima Sana who appeared in the FairBreak Invitational T20 event in Dubai have returned to Karachi and will take part in the three-day pre-series training from Saturday (May 21).

Kainat Imtiaz (T20I) and Sadia Iqbal (both squads) have returned after recovering from injuries and proving their form and fitness in the pre-series camp.

The pre-series camp will conclude today with a practice session at the Hanif Mohammad HPC, a 50-over practice match was staged between the 26 camp participants at the Southend Club on Tuesday.

Chief Selector Asmavia Iqbal said, “I want to wish the two squads the very best for the series, we have provided opportunities to Gull Feroza, Sadaf Shamas and Tuba Hassan on the basis of their future potential and skills. The three youngsters took part in the emerging camp last December and made an impression with their talent. I am pleased to see their progress and we all feel it is now the right time to give them exposure of international cricket.”

“I believe we have two formidable squads for both T20Is and ODIs, both squads have good depth and most certainly have the pedigree to beat the Sri Lankan team in what should be an exciting series,” she added.

Support personnel for both T20Is and ODIs:

US artistic swimmer Alvarez, who fainted in pool, forced out of team event

No more in contact with Imran Khan: Ramiz Raja