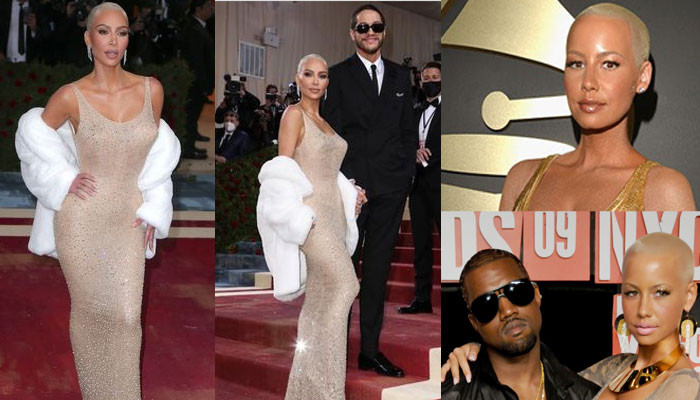 American TV personality and socialite Kim Kardashian stole the limelight when she graced the Met Gala in New York rocking a dress previously owned and worn by Marilyn Monroe, but the reality star’s eagle-eyed fans have noticed some similarities between her and Kanye West’s ex.

The mum-of-four bleached her dark hair blonde for the star-studded event, and turned heads on the red carpet as she walked arm-in-arm with boyfriend Pete Davidson while wearing the gown, teamed with a white fur coat over her shoulders.

Kardashian’s eagle-eyed fans have spotted that her high-fashion look is very similar to that of Amber Rose, who dated Kim’s ex-husband Kanye from 2008 until 2010.

Many pointed out how similar the 41-year looked at the Met Gala to model Amber’s gold and nude-coloured dress she wore to the Grammy Awards in 2014.

Sharing a close-up of the outfits, one user sarcastically captioned the picture of Kim: “Amber Rose attends the Met Gala.”

“Omggggg she does look like Amber,” another agreed, as one commented: “Amber is prettier/younger/looks more ‘real’.”

Kim Kardashian hit the headlines when she arrived at the prestigious fashion bash in New York donning a nude, bejewelled dress that was previously worn by the Hollywood icon, Marilyn Monroe, to serenade US President John F. Kennedy in 1962.

The stunning dress, Kim wore at Met Gala 2022, originally cost Marilyn Monroe $12,000, it was recently valued at a whopping $5 million.