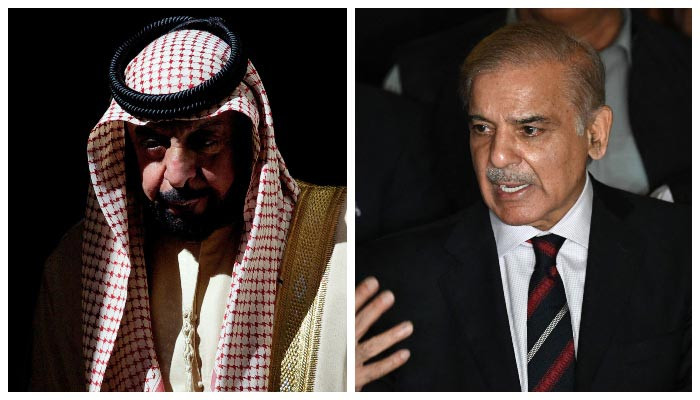 A statement from the PM Office said Saturday the prime minister would offer his condolence to the Crown Prince of UAE Sheikh Mohamed bin Zayed Al Nahyan tomorrow (Sunday) — after arriving in the state following the conclusion of the London huddle.

In a condolence message earlier, the prime minister said Sheikh Zayed bin Sultan Al Nahyan laid the foundation of UAE, whereas Sheikh Khalifa — his eldest son — strengthened it and gave it exemplary development.

PM Shehbaz said Sheikh Khalifa took his father’s developmental vision for the UAE to new heights with fifty years of continuous hard work. He added that his death was a great loss for the Muslim Ummah.

The UAE president died yesterday aged 73 after a years-long battle with illness, triggering a period of mourning and a handover of power in the oil-rich Gulf state.

Sheikh Khalifa, who was in office during a time of rocketing fortunes for the United Arab Emirates but was rarely seen in public, was laid to rest in Abu Dhabi’s Al Bateen Cemetery just hours after his death was announced.

Sheikh Khalifa’s funeral prayers were conducted by his expected successor and half-brother Mohamed bin Zayed, who has long been viewed as the country’s de facto ruler.

The most visible testament to Sheikh Khalifa is the world’s tallest building, Dubai’s Burj Khalifa, which was renamed after he bailed out the debt-hit emirate when the global financial crisis struck in 2009.

Flags flew at half-mast above the interior ministry in Abu Dhabi and other landmarks at the start of 40 days of official mourning, with work suspended in the public and private sectors until Tuesday.

Sheikh Khalifa took over as the UAE’s second president in November 2004, succeeding his father as the 16th ruler of Abu Dhabi, the richest of the federation’s seven emirates.

He has made few public appearances since 2014, when he had surgery following a stroke, although he has continued to issue rulings.

The cause of death was not immediately released.