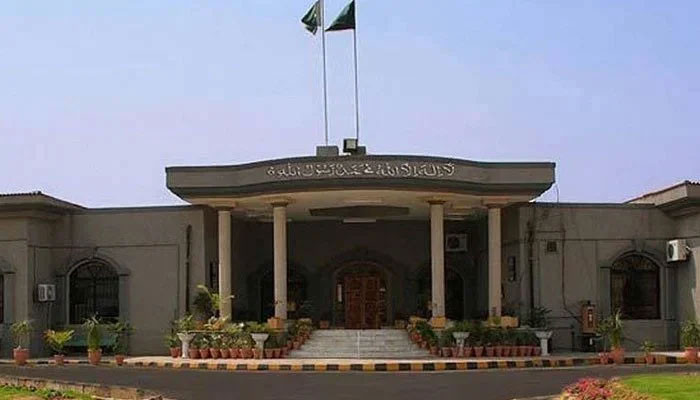 ISLAMABAD: The Islamabad High Court (IHC) Thursday ordered police not to register further cases against the PTI leaders in the Masjid-e-Nabvi incident.

Last month, Faisalabad police booked at least 150 people, including former prime minister Imran Khan, for their alleged involvement in harassing and stopping a government delegation when they visited Masjid-e-Nabvi (PBUH).

PTI Chairman Khan had lashed out at the government last week for nominating him in the FIR, but Interior Minister Rana Sanaullah later clarified that the government has nothing to do with the cases.

At the outset of today’s hearing, PTI lawyer Faisal Chaudhry said police reports have suggested that they have received four complaints, but they were being investigated.

At this, the IHC CJ said the court respects religious sentiments but the state has a duty to perform. He noted that his court had received a similar plea, but the judges had not admitted it.

“If there is an impression that this is happening politically, then it is the job of the state to dispel it […] as, in the past, the state has used religion,” the IHC CJ noted.

Justice Minallah remarked that in the past, such cases have put people’s lives at stake and asked the deputy attorney general — the government’s representative — that how should the state deal with the matter.

“In the past, blasphemy [law] has been misused, and lives have been lost.”

At this, the deputy attorney general said the relevant people should have approached the Lahore High Court (LHC) with regards to the case registered against them, not the IHC.

Advocate Faisal told the court that at the moment, “there is no government in Punjab”.

Moving on, the IHC CJ said the Constitution of Pakistan has been disrespected many times and had that not been the case, the country would not be at the juncture where it is today.

Justice Minallah noted that all institutions fall under the Constitution’s ambit, and the state must ensure that the religion is neither exploited nor used in the Masjid-e-Nabvi case.

“Religion should not be used in politics; it has been used in the past. The state should sit down with all political stakeholders and draft a policy to keep religion away from politics,” he said.

At this, the deputy attorney general told the court that he would seek guidance from the government in this regard.

The court asked the petitioner’s lawyer as to what the state should do when such matters arise. To this, the PTI counsel said the Interior Ministry should be sent the details of such cases.

After wrapping up the arguments, IHC CJ adjourned the hearing for two weeks.