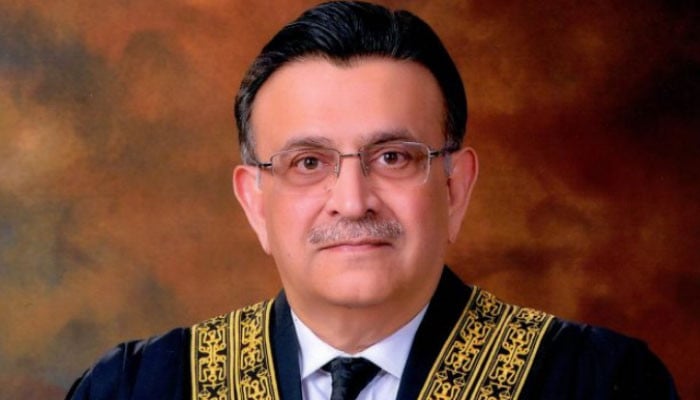 His remarks came during the hearing of a presidential reference seeking the interpretation of Article 63(A) of the Constitution of Pakistan, which was later adjourned till Monday.

At the outset of the hearing, PML-Q’s lawyer Azhar Siddiq resumed his arguments.

He maintained that the purpose of Article 63(A) is to restrict the members of political parties from defecting and that a constitutional amendment was also made in this regard.

Siddiq contended that dissidents of PTI violated the party policy on April 16 by voting for Hamza Shehbaz in the election of Punjab chief minister.

Meanwhile, Justice Alam remarked that some of the PML-Q members are on one side, while some are on the other and the party head is silent.

“Don’t know which side are the members of a party from Balochistan on,” he added.

The judge said that the apex court will look into the case of the Election Commission of Pakistan’s declaration when it receives it.

Meanwhile, CJP Bandial remarked that everything would have been revealed had the National Assembly debated on it, but no debate was held after the leave was granted.

“Someone would have asked the reason behind bringing the no-confidence motion if there had been a debate,” the top judge remarked.

PML-Q’s lawyer Advocate Siddiq maintained that the matter of defection is lingering since 1960.

At this, CJP Bandial rebuked him, saying that this is not the case as Article 63(A) was incorporated in the Constitution through a democratic amendment.

“The court believes that defection is a serious mistake but disqualifying someone for life is a very strict punishment,” the chief justice remarked, adding that the SC has set some conditions for disqualification for life.

Meanwhile, the newly appointed Attorney-General of Pakistan, Ashtar Ausaf, advanced towards the rostrum.

CJP Bandial inquired if Ausaf would assist the court on the case.

“I will assist the court if it wants,” AGP Ausaf said, adding that a judicial debate would determine the direction of the case.

He informed the court that he will give arguments on Tuesday.

CJP Bandial observed that it is a very important and complicated case.

“A line has to be drawn somewhere on the matter of defection,” he remarked.

He asked if Article 63(A) can be interpreted in a way that brings political and legal stability.

“Or the party chairman should be allowed to decide whether to punish (over defection) under the interpretation of Article 63(A).”