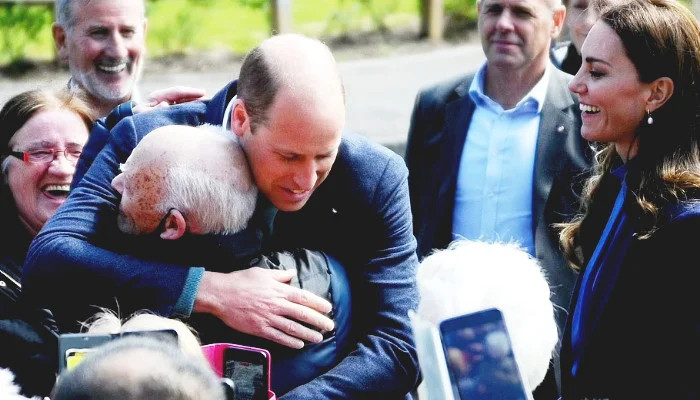 Prince William broke royal protocol on Thursday when he shared a hug with an elderly man in Scotland, and a body language expert believes that the gesture was ‘authentic and genuine’, reported Express UK.

William and wife Kate Middleton landed in Scotland in Wednesday for a two-day visit, and on Thursday met cheering crowds in Glasgow.

Upon seeing an emotional pensioner crying out of joy after meeting William, the future king gave the old man a warm hug.

Analysing the same, body language expert Darren Stanton said: “Such a moment marks an unprecedented demonstration of just how authentic, empathetic and open Kate and William are.”

He continued: “As per royal protocol, the Queen will never shake hands with anyone with bare hands. You’ll notice if she’s shaking hands with another person, she will always be wearing gloves and it’s one of the traditions she has adopted throughout her reign.”

“William embracing the elderly man is a rare outpouring of genuine emotion from a senior Royal and you can tell from the man’s face it was one of true elation, with the moment sure to stick with him for the rest of his days,” Stanton added.

The expert went on to state: “This was a real authentic connection and not one faked for the sake of being in the public arena. You can see the sincerity in William’s face as he engulfed his arms around the man, with the prince not fazed about being in such close proximity.”

Stanton also shared his thoughts about Kate’s expressions during the embrace, saying: “Kate’s reaction, meanwhile, is one of pure joy and her face is totally engaged, flashing a huge smile, as she witnessed the sweet embrace.”

He further said: “The hug demonstrates that William and Kate do truly care about people and do not take their privileged position for granted. It marks the way forward for when William does eventually become King, with his compassion potentially allowing for him to become one of the most popular monarchs in history.”

“We have never seen such an outpouring of love from the public too, when it comes to senior Royals, since Diana. It’s clear the public have very much taken William and Kate into their hearts and demonstrations such as this one will no doubt cement the nation’s affection for them,” Stanton concluded.