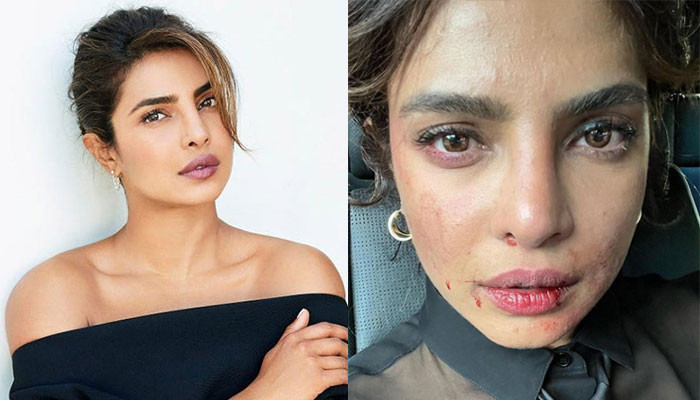 Priyanka Chopra’s fans could not help but show their concern as she posted a picture of her bruised face that she captured on the sets of her upcoming spy series Citadel.

Taking to Instagram, The White Tiger star dropped the photo with blood marks made from make-up on her face.

“Did u have a tough day at work as well? #actorslife #citadel #adayinthelife,” the global sensation captioned the picture.

The actor donned a black outfit with a black tie with her hair tied up. PeeCee looked drop dead gorgeous even with fake bruises under her nose and on lower lip.

Several fans expressed their concerns as one wrote, “Omg for a sec I thought you got hurt.”

Another commented, “What happened are you ok?”

Earlier, Priyanka shared with her fans that her daughter Malti Marie finally came home after spending 100 plus days in NICU.

She posted a heartfelt image with her daughter, whom she and husband Nick Jonas welcomed via surrogate, on the occasion of Mother’s Day.

“On this Mother’s Day we can’t help but reflect on these last few months and the rollercoaster we’ve been on, which we now know, so many people have also experienced. After 100 plus days in the NICU, our little girl is finally home,” Priyanka wrote.