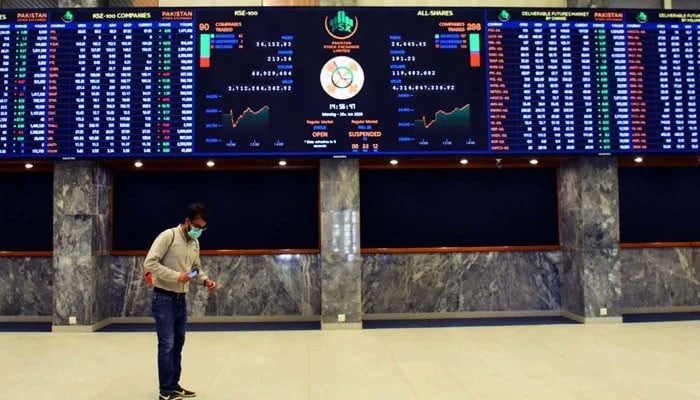 KARACHI: Stocks took a hit on Monday as the benchmark KSE-100 Index of the Pakistan Stock Exchange (PSX) plunged over 1,400 points owing to concerns regarding the International Monetary Fund (IMF) programme and rupee-dollar parity.

Shares of 363 companies were traded during the session. At the close of trading, 38 scrips closed in the green, 311 in the red, and 14 remained unchanged.

Overall trading volumes rose to 305.2 million shares compared with Friday’s tally of 305.20 million. The value of shares traded during the day was Rs9.23 billion.

Reasons behind bloodbath at PSX

Speaking to Geo.tv, BMA Capital Executive Director Saad Hashemy said that there were four reasons behind the bloodbath at the PSX.

Saad Hashemy said that the market fell due to uncertainty on the economic front, negative rupee-dollar parity, lack of clarity regarding the IMF programme and rising interest rates.

He further said that despite the valuations being attractive for the market players, the negative sentiment may not be prolonged.

Hashemy said that in order to control the situation the government needs to lay out a concrete economic plan, adding that a strategy needs to be devised regarding oil prices and to control rising commodity prices.