HomePAKISTANPTI govt threatened me of martial law a day before no-trust vote:...
PAKISTAN 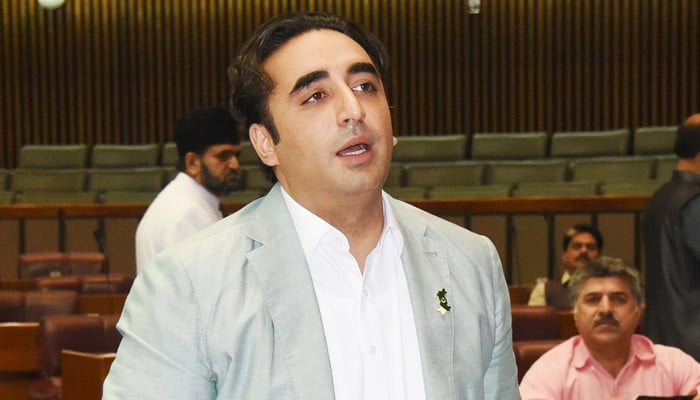 ISLAMABAD: Foreign Minister Bilawal Bhutto-Zardari Thursday revealed that the PTI-led government had threatened him of martial law if the PDM did not agree on immediate elections in the country just a day before voting on the no-confidence motion against then prime minister Imran Khan.

Addressing a National Assembly session today, Bilawal Bhutto said that the threatening message was conveyed to him by a PTI minister. Criticising the previous government, the foreign minister said that the new coalition government believed in democracy and transparent elections.

“We do not believe in political engineering,” he said, adding that they have been calling for electoral reforms. He reiterated that the incumbent government will introduce electoral reforms to ensure transparent elections in the country.

“We are a democratic force and demand transparent elections. We had earlier demanded that electoral reforms should take place first. This is PPP’s clear stance,” Bilawal said.

Referring to the events surrounding the no-trust motion against then-premier Imran Khan, Bilawal said: “This house must form a high-level parliamentary commission or committee to investigate the events leading up to April 3, post-April 3, of the night of April 9 and 10, and the events that have taken place to date after [the no-confidence motion was passed].”

The PPP chairman said the “attacks on the constitution and the house” should be taken seriously, and an investigation should be held to determine who was at fault.

“Even the Supreme Court termed the previous government’s acts of April 3 as unconstitutional. The way that the PTI government tried to escape from the challenge of no-confidence, it was unconstitutional and the people of Pakistan demand accountability,” he added.

Bilawal said the acts of undermining the constitution had taken place in the past as well and the parliament remained mum on it, therefore, these events should be investigated.

‘Imran thinks he is a sacred cow’

Berating Khan, he said the former prime minister should be asked about his performance during his tenure, he should be questioned about the economy, and how his “ego” damaged Pakistan internationally, in a reference to the PTI chairman’s alleged US threat.

“The former prime minister thinks he is a ‘sacred cow’ as he is currently speaking against the constitution, national security, and economic stability,” the foreign minister said.

“Wherever we see, there is a crisis […] the conditions are even worst than we had thought when we were in the Opposition. The situation in Pakistan is at a crisis point — there should be no difference of opinion in this regard,” Bilawal said.

In other matters of business, the National Assembly unanimously passed a resolution denouncing the latest Indian attempt for demographic engineering in occupied Jammu and Kashmir through a so-called “delimitation commission”.

The foreign minister had moved the resolution, which stated that India aims to artificially alter the electoral strength of the Muslim majority in occupied Kashmir.

Noting that the commission’s recommendations have been rejected by a cross-section of political parties in the occupied region, the resolution categorically rejected the report of the so-called delimitation commission that seeks to convert the Muslim majority territory into minority and further marginalise, disenfranchise, and disempower the Kashmiri population and advance the political and electoral objectives of the BJP.

The resolution noted that through the delimitation exercise, India is making attempts to further its illegal actions of 5th August 2019 and subsequent measures.

The resolution recalled that Jammu and Kashmir is an internationally recognised dispute and a long-standing item on the agenda of the UN Security Council.

It declared that no façade of elections based on a sham delimitation exercise can substitute the legitimacy and indispensability of a free and impartial plebiscite under the auspices of the UN.

The resolution demanded that India should honour and fulfil its obligations under international law, UNSC resolutions, and the fourth Geneva Convention, whilst refraining from bringing about any illegal demographic changes in the occupied territory.

It urged the Indian government to forthwith end its oppression and widespread violations of human rights and international humanitarian law in IIOJK and enable the Kashmiri people to exercise their inalienable right to self-determination as enshrined in the Security Council resolutions.

The resolution called upon the international community to ensure accountability for India’s grave and persistent violations of human rights and war crimes in IOJK.

The resolution reiterated Pakistan’s unflinching commitment and solidarity with Kashmiri, reaffirming that Pakistan will continue to extend all possible support in their just struggle for freedom and self-determination.

It also asked the government to continue to expose and counter the Indian moves before the international community and to highlight and forcefully project the Kashmir cause at all bilateral and multilateral forums including the UN and the OIC.