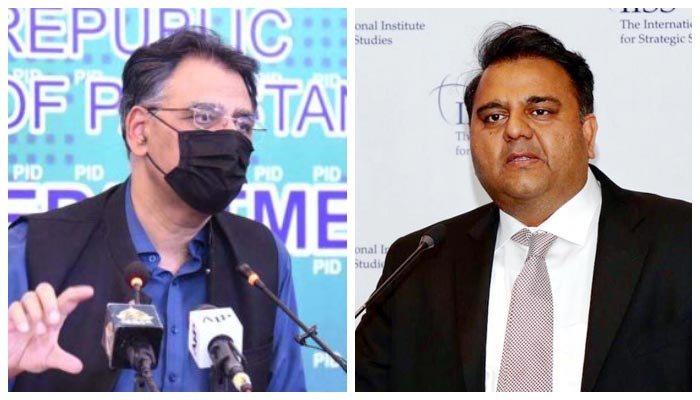 PTI, which had filed a presidential reference in the Supreme Court seeking interpretation of Article 63(A) during its government, hailed the top court’s order and called for the prime minister and Punjab chief minister’s resignation.

The PTI had, before the no-confidence motion, said that the defected members of the parliament should not be allowed to vote and called for unseating them.

‘This is Imran Khan’s win’

The PTI leader, in a press conference, said the PML-N has already lost three out of 173 votes, while if President Arif Alvi summons a session for a vote of confidence, then the prime minister will have 169 votes. Similarly, according to Chaudhry, Hamza also has fewer votes than required.

“As a result of this decision, the governments of both — Shehbaz Sharif and Hamza Shahbaz — have come to an end,” the ex-information and law minister said, asking them to resign.

He then urged President Alvi to dissolve the National Assembly and Punjab Assembly as new elections were the “only way for Pakistan to achieve stability.”

“This is Imran Khan’s win. It has been confirmed that these people [dissidents] votes will not be counted and they have been disqualified,” the PTI leader added.

The PTI leader, in a tweet, asked the government to resign immediately as it did not “have the right” to rule the country for another day.

While addressing PTI’s jalsa in Kohat, Senator Faisal Javed said after the Supreme Court’s interpretation, the “PML-N has come to an end”.

Hamza is no more the chief minister, Javed said, adding that after Punjab, the incumbent government in the Centre would also fall.

In a tweet, former foreign minister and PTI Vice Chairman Shah Mahmood Qureshi welcomed the Supreme Court’s decision, noting that it would help curb horse-trading in the future.

“From today onwards, there is no standing of the incumbent Punjab government,” the PTI leader said.

He added: “The imported federal government, which came to power through a foreign conspiracy with the help of a curse like floor-crossing, should also announce immediate elections.”

Article 63(A) of the Constitution of Pakistan deals with the defection of parliamentarians.

According to the article, a lawmaker can be disqualified on the grounds of defection if they vote or abstain from voting in the House contrary to any direction issued by the parliamentary party to which they belong.

However, this is restricted to three instances where they have to follow the party’s directions:

Per the article, the head of the party is required to present a written declaration that the MNA concerned has defected.

However, prior to presenting the declaration, the head of the party will have to give the MNA concerned a chance to explain the reasons for defection.

Following that, the party chief will then forward the written declaration to the speaker, who would, in turn, hand it over to the chief election commissioner (CEC).

The CEC will have 30 days at their disposal to confirm the declaration. Once confirmed, the MNA concerned will no longer be a member of the House and their “seat shall become vacant”.