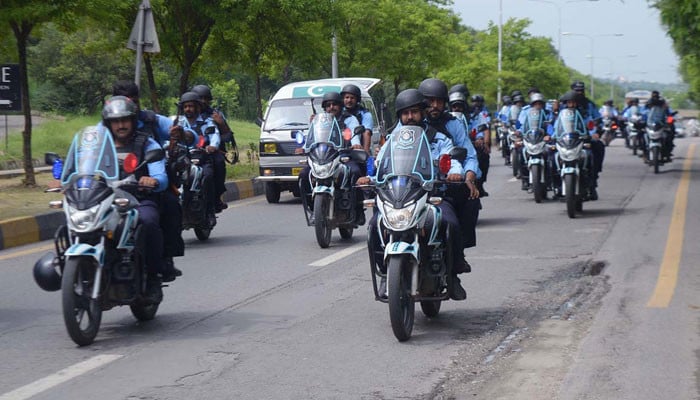 ISLAMABAD: As PTI gears up to reach the federal capital, Islamabad Police Saturday revealed that an unarmed riot force would be deployed to deal with the protesters under a “defence mechanism”.

A report by the office of the IGP of the capital city police reported that the PTI should only be allowed to protest as per court rulings.

“No political party will be allowed to hold a rally in the red zone to ensure the safety of sensitive installations, diplomats’ residences, and embassies of the foreign countries,” the report said.

“If a protest sit-in is staged in total compliance with the required code of conduct, we (the capital city police) are ready to provide security.”

The report was filed with the Islamabad High Court (IHC) during the combined proceedings of PTI’s petition for a no-objection certificate (NOC) for holding a sit-in and a rally in the federal capital and businessmen’s plea for ensuring citizens’ rights during the protests.

The report also proposed that the roads leading to the airport should be handed over to federal agencies, while PTI could be made to provide a financial guarantee that its protest would be peaceful and no government property would be vandalised during its course.

“If PTI comes up with the required guarantee then there will be no need for blocking the city with containers and we will provide security.”

The report — which has also been submitted to the Islamabad High Court by IG Police — highlighted the threats to Khan’s life.

According to the report, PTI has violated its assurance given to the Supreme Court on May 25.

“Protesters set fire to trees and torched a police van, PTI leader Ali Amin Gandapur allegedly called on his workers to take arms to the long march with arms,” the report admitted. Imran Khan himself has admitted that some of his people were armed, as per the IGP office.

The report also quoted Sheikh Rasheed and Faisal Vawda as saying that it would be a bloody march. “It was proven true after Imran Khan came under an armed attack in Wazirabad.” There are reports that one person was killed and several protesters were injured by the firing of Imran Khan’s own guard, the report claimed.

The Supreme Court has made it clear that rallies are allowed as a democratic right which cannot be used to overthrow the government, according to the report.

“Likening his long march to jihad, PTI Chairman Imran Khan said it is a decisive stage, the people should now decide whose side they are on?”

It added that PTI was yet to be issued a NOC for the rally in Islamabad. “Uniformed officials of KP and Azad Jammu and Kashmir police are also with the demonstration and there is a risk of a clash in Islamabad.