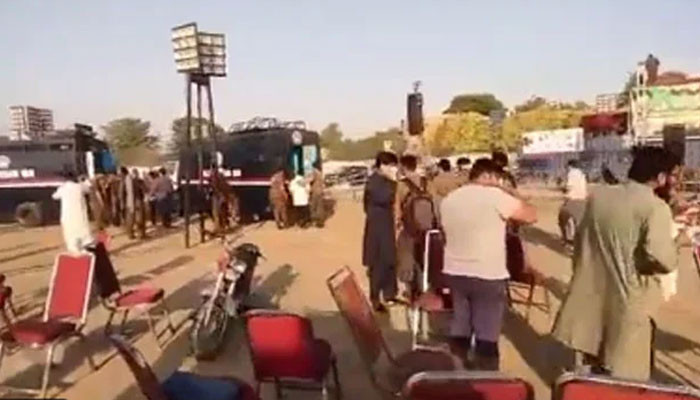 SIALKOT: The police on Saturday morning got the PTI Sialkot jalsa venue vacated after the party forcefully tried to hold a public gathering at the CTI ground, a property of the Christian community, without their consent.

A day earlier, the district administration of Sialkot had rejected the PTI’s request for holding a rally at the CTI ground after the Christian community raised an objection over the meeting at their property.

Earlier today, PTI leader Usman Dar accompanied by a score of PTI workers arrived at the ground and started preparations for the rally, upon which police launched a crackdown and arrested Usman Dar and several other party workers.

“We have stopped the PTI from holding a public meeting at the CTI ground on the request of the Christian community,” said Deputy Commissioner Imran Qureshi.

He said that permission is required for holding a public meeting at a private place. Taking action on the request of the minority community, the police have got the CTI ground vacated. Christian community told the police that they perform their religious rites on the ground.

The Christian community was protesting against PTI’s call for holding a rally at their property, said the district administration.

The Christian community had approached the Lahore High Court, the DPO said, adding that the police took action on court orders to stop the PTI from holding the rally.

The DPO, however, said: “We are ready to give PTI an alternate place for public gathering.”

Rejecting reports of arrest, DPO said that no one has been taken into custody, adding that they were just removing chairs and other stuff kept over here.

Reacting to the police action in Sialkot, former federal minister for planning Asad Umar said that the ‘imported government’, frightened by the historic public gatherings of Imran Khan, tortured and arrested Usman Dar and others in the city.

Taking to his Twitter handle, he said “The nation is not afraid. Get ready Sialkot! Imran Khan is coming this evening.”

He maintained that the entire Pakistan will see that Sialkot stands with the captain.