‘PTI willing to play parliamentary role but govt not serious’ 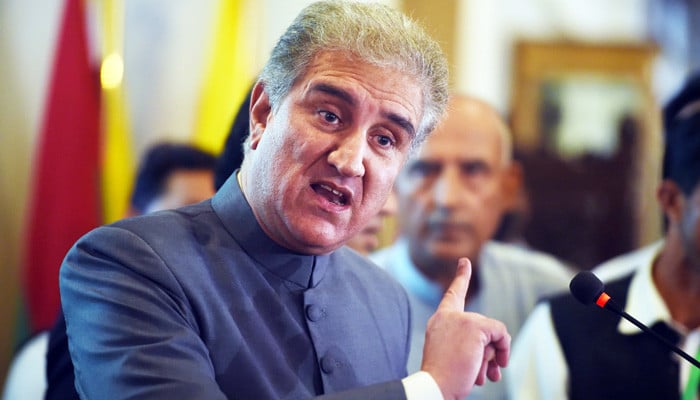 Pakistan Tehreek-e-Insaf (PTI) Vice Chairman Shah Mehmood Qureshi has said that the party is willing to play a parliamentary role, but that the government is not serious enough to make a commitment to it.

The remarks came in response to Foreign Minister Bilawal Bhutto-Zardari’s criticism of PTI Chairman Imran Khan during a gathering in Garhi Khuda Bakhsh on the 15th death anniversary of his mother and former prime minister Benazir Bhutto.

The foreign minister had asked Khan to return to Parliament as neither he nor his party “could bear” what’s coming to them.

Qureshi, in response, said that his party is ready to play a parliamentary role, but that the government isn’t as it is not giving a date for general elections.

“The establishment is apolitical. How can we contact them?”

Responding to Bilawal’s statement urging the PTI to rejoin Parliament, Qureshi said that Bilawal could not invite the party to join Parliament as it is the prerogative of the prime minister.

Censuring Imran Khan, Bilawal said that it was a “final warning” to the puppet — a clear reference to the PTI chief — to return to Parliament and join the National Accountability Bureau (NAB) and election reforms.

The PPP chairman said that he does not want NAB to be used against Imran.

“Therefore, you [Imran] should come back to Parliament. Otherwise, we will not be in a position to prevent them from doing what they do,” he warned.

Taking to Twitter, the PTI leader said: “The puppets of the establishment set up a farce at the mausoleum of Benazir Bhutto today.”

“Zardari and his son dealt such a deep blow to Benazir’s philosophy that her assassins could not eliminate Bhutto but they managed to fulfil the mission of Benazir’s adversaries by abolishing the federal status of the PPP,” he tweeted.

According to Fawad, the country currently has only one federal party and a single leader which is PTI and its chairman. Imran Khan’s call is being heard across the country, he said, adding that his call is resonating from the mountains of Chagai to the Khyber, and from Lahore to Karachi.

He alleged that Zardari and Bilawal sponsored assaults on the Constitution.