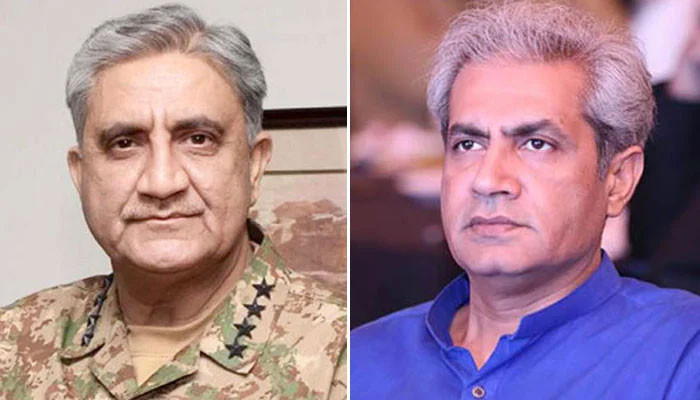 LAHORE: Punjab Governor Omar Sarfraz Cheema on Wednesday appealed to Chief of Army Staff (COAS) Qamar Javed Bajwa to play his due role in the implementation of the constitutional framework in the province.

In his letter to the army chief, the Punjab governor expressed his concerns over the prevailing political crisis in the province and urged him to play his role in restoring people’s confidence in provincial and federal governments.

Meanwhile, he also sent copies of his letters to the prime minister and the president over the Punjab crisis to the army chief.

Earlier in the day, Omar Sarfraz Cheema wrote a letter to Prime Minister Shehbaz Sharif about the political and constitutional crisis in the province.

In the letter, the Punjab governor vowed to protect the country’s Constitution by utilising all of his skills and abilities.

“No power can bar me from stopping your son’s unconstitutional actions,” the governor told the PM.

Declaring Usman Buzdar’s resignation as controversial, Cheema accused the PML-N of securing the support of PTI’s defected lawmakers and added that the turncoats were even presented before the media.

“Hamza Shahbaz has taken advantage of being the son of the prime minister,” he wrote, adding that he is the “main character” behind all the unconstitutional actions in Punjab.

The governor said that the Punjab Assembly secretary had apprised him about the violations of laws relating to the “fraud election” for the post of chief ministership.

The governor further said that he had written a letter to the president to bring all the facts into his knowledge and sought his guidance in this regard.

IG Punjab and the chief secretary played an “evil role” in the recent election for the CM’s slot, he alleged, adding that the officers besieged the Governor House in the name of the security ahead of the oath-taking ceremony. The chief secretary also tried to pressurise the governor.

“You, as prime minister, dragged the country towards political crisis by using your powers unconstitutionally,” he accused the prime minister.

“You, your son and Maryam Nawaz are nominated in criminal cases”, the governor said, adding that it is the country’s “bad luck” that the PM and Punjab CM were on key post despite being on bails.