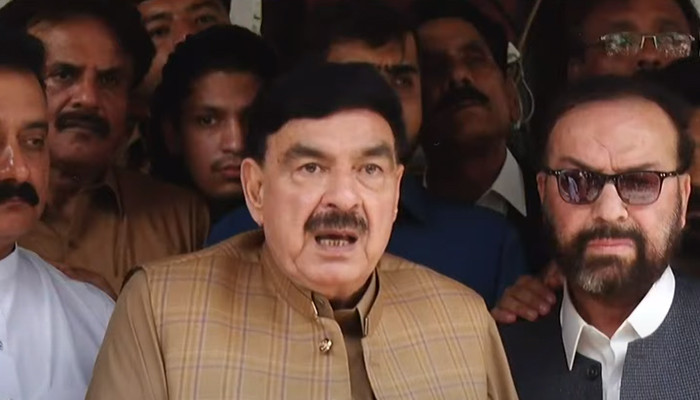 Rasheed’s prediction comes a day after he claimed PML-N leaders were planning to kill him and are trying to attack the long march. He had said his life is in danger because the Sharif family and other PML-N leaders want to get rid of him.

Speaking to the media in Rawalpindi Tuesday afternoon, Sheikh Rasheed said that there would be no peace “in a country where a drug dealer is the interior minister”.

“These people want to take the situation elsewhere, but we pray that peace prevails in the country,” he said, adding that fighting has started on the streets for which he held Interior Minister Rana Sanaullah responsible.

He reiterated his support for Imran Khan, saying he will stand by him in the long march.

The former interior minister said that the people whose faces the public did not want to see have been given power.

“The situation in the country is bad and these issues should be resolved by May 31,” he said, asking that the date for an election should be finalised within 90 days.

In response to a question, the former interior minister said he stands with the Pakistan Army and that if Imran Khan assigns him the duty to communicate, he will be ready to do so.

Meanwhile, a day earlier, the ex-interior minister had said that former prime minister and PTI Chairman Imran Khan was “ready to sit” with premier Shehbaz Sharif over talks of an early election.

In an interview with VOA, the ex-interior minister said he was making efforts to clear the “misunderstandings” between the establishment and the PTI.

Rasheed added that although he was in favour of “peace” with the armed forces, but in case of a “war”, he would stand by the PTI chairman.

The ex-interior minister said the PTI’s long march was not aimed at anything but the announcement of early general elections as Khan was not ready to accept the new government.

Khan repeatedly blamed the US for backing the no-confidence motion — that lead to his ouster last month — and has refused to accept the newly-elected premier, saying “there can’t be any bigger insult to this country”.

Later, while speaking to Dawn News, the former interior minister had said that for the first time in his political career, he had informed the army that he has decided to side with Khan.

The veteran politician said that he also supports the army, adding that he considers the military an “essential part of Pakistan.”

Shedding light on the current political milieu of the country, Rasheed said that he is standing by Khan’s side.

“Imran Khan is not going to withdraw his demand for the elections. He is turning into a Bhutto-like figure,” he said. “While I have good relations with the army, I will still stand with Imran Khan as I cannot double-cross him.

He further said that he is foreseeing Imran Khan to be clean-sweeping the elections. “And if he works hard to win over the people of Sindh, this province will also support the PTI.”

Rasheed went on to say that he cannot go against the wishes of Imran Khan and only tendered his resignation because of him.

“Whether I win or lose, my loyalties will remain with Khan.”