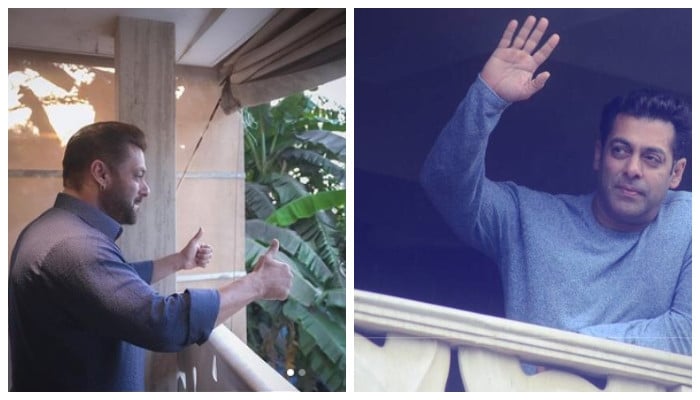 Bollywood superstar Salman Khan, who is an avid social media user wished his millions of fans a very happy Eid.

On the holy and festive occasion, the Ek Tha Tiger actor took to his social media space, shared swoon-worthy photos of himself, and left fans in awe with his breathtaking look.

Dressed in a navy-blue kurta, Salman can be seen wishing the thousands of fans gathered outside his residence, Galaxy Apartments, in the Bandra locality of Mumbai.

In the first picture, one can see the Sultan actor striking the thumbs up pose, while the next shows his back, while he faces a massive crowd.

Meanwhile, fans flooded the post with likes and comments in no time. It should be noted that owing to the actor has made his Eid-special balcony appearance after three years.

Take a look at Salman Khan’s post on Eid:

Meanwhile, on the professional front, Salman Khan has a couple of exciting projects in the pipeline. He will soon be seen in the much-talked-about Tiger 3 with Katrina Kaif and Emraan Hashmi. Salman and Katrina will be seen reprising their respective roles of Tiger and Zoya in the movie while Emraan will be seen as the lead antagonist.

On the other hand, Salman will also be seen in Sajid Nadiadwala’s upcoming production Kabhi Eid Kabhi Diwali which will also star Shehnaaz Gill and Aayush Sharma in key roles.