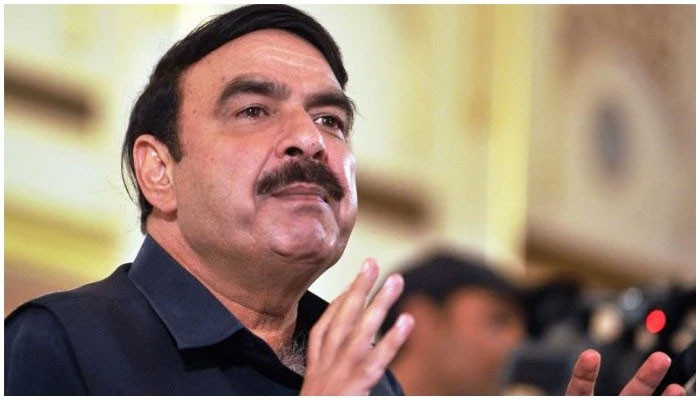 ISLAMABAD: Former interior minister Sheikh Rasheed on Thursday hailed the “historic” directives of the Supreme Court (SC) in the suo motu case relating to “perceived interference” by “persons in authority” in the investigation and legal proceedings of criminal matters against the government officials.

Terming the directives “historic and golden”, Sheikh Rasheed said that “these people” were threatening NAB. He alleged that Interior Minister Rana Sanaullah himself removed his and other people’s names from the ECL with the approval of the cabinet.

“They have 50 years of experience about giving themselves NRO,” said Rasheed.

The former interior minister accused the ruling PML-N of changing the files of the cases against its leadership and appointing its workers to the prosecuting department.

All those officers working on the cases against the Sharif family have been removed, he added.

He added that as soon as Shahbaz Sharif assumed the charge of PM’s Office, DG FIA Sanaullah Abbasi was removed and the prosecutor showed disinterest in cases against the family in the court. He alleged that FIA’s whole record had been shifted to two houses in Lahore’s Model Town.

“This week is very impost as major decisions will be made during the next seven days,” said the ex-interior minister.

Earlier in the day, the SC stopped the government from making new appointments, transferring and postings officers relating to the high-profile cases.

A five-member bench of the top court headed by CJP Umar Ata Bandial issued the order while hearing a suo motu case relating to “perceived interference” by “persons in authority” in the investigation and legal proceedings of criminal matters against the government officials.

At the outset of today’s hearing, Chief Justice Umar Ata Bandial expressed concerns over transfers and appointments of officials in high-profile cases and refrained the prosecution from withdrawing such cases.

The chief justice noted that several officers were transferred from NAB Lahore and FIA, adding that the FIA’s prosecutor in the Lahore High Court was also replaced. The court further maintained that DG FIA Sanaullah Abbasi and director Rizwan were also replaced.

Referring to Chief Minister Hamza Shahbaz’s case, CJP Bandial mentioned that the DG FIA barred one of the investigation officers from appearing before the court.

“Nobody should interfere during the investigation and in the affairs of the prosecution branch,” the chief justice told the attorney-general.

Justice Bandial remarked that such practices affect the rule of law in the country. As per the Constitution, the SC is responsible to maintain peace and an atmosphere of trust in the society, said the chief justice.