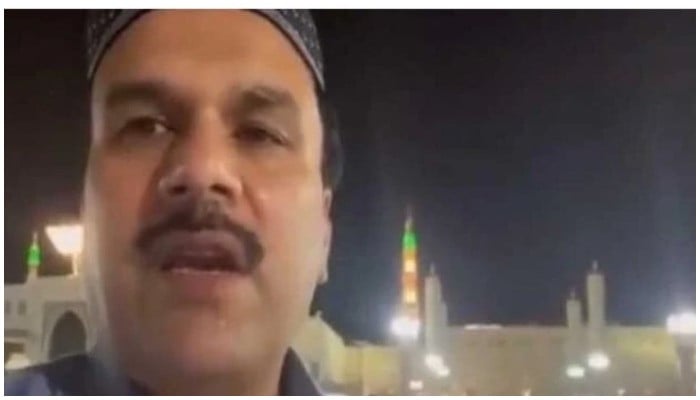 ISLAMABAD: In the wake of the incident of slogan chanting at Masjid-e-Nabawi against Prime Minister Shehbaz Sharif and his delegation, former federal minister Sheikh Rashid Ahmed’s nephew MNA Sheikh Rashid Shafiq  was held at the Islamabad airport upon his arrival from Saudi Arabia early Sunday morning.

Some protesters, allegedly belonging to the PTI, violated the sanctity of the Masjid-e-Nabawi (PBUH) in Madinah on Thursday by loudly catcalling Prime Minister Shehbaz Sharif and members of his delegation.

Sources affiliated with the airport staff said that Shafiq flew to Pakistan through a private airline.

Confirming the arrest, Rashid said that his nephew had just touched down in Islamabad after performing Umrah, at the time of his arrest.

A case had been registered against Shafiq at Faisalabad’s Madina Town on behalf of Muhammad Naeem. A total of 14 known and 100-150 unidentified people, including PTI Chairman Imran Khan, Fawad Chaudhry, Shehbaz Gill, Sahibzada Jahangir and other PTI members have been nominated in the case.

PM Shehbaz and his delegation had reached Saudi Arabia on Thursday for a three-day official visit at the invitation of Saudi Crown Prince Mohammad bin Salman bin Abdulaziz.

But as Marriyum Aurangzeb and Shahzain Bugti arrived at the mosque, the protesters started chanting slogans of “chor, chor (thieves)” when they saw theme premier and harassed and raised objectionable slogans.

The protesters had also misbehaved with the JWP chief Shahzain Bugti and pulled his hair.

The protesters filmed the entire episode with their mobile phones.