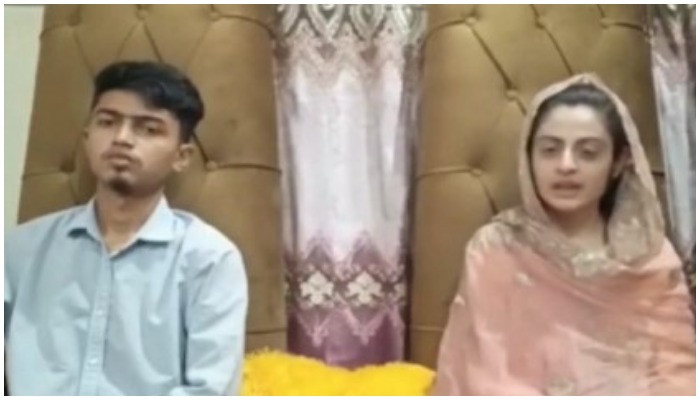 Dua Zehra, the 14-year-old girl who had gone missing from Karachi last month but later revealed that she had run away to marry the man of her choice,  has recently said in a video message that the couple’s life is in danger.

In the  video message, Dua  maintained that she had willingly left Karachi to marry Zaheer Ahmed, 21, and was living a “happy and peaceful life  in Lahore along with her husband and in-laws.”

She said that despite the Constitution and the law of the  country allowing her to “marry anyone I want” and “live wherever I want”, the Punjab and Sindh police were “harassing her” and were “carrying out an illegal search to recover her.”

The teenager refuted claims being made on social media that her in-laws were part of some trafficking gang and said that they were  “respectable people” and “better than my parents.”

She also maintained that she does not wish to go to Karachi as she was happy in her husband’s Lahore home.

“I had recorded a statement in the court in favour of my husband and had left a letter for my parents before leaving, explaining the reasons behind my decision to marry him,” she said, adding that despite her informing them, her parents went ahead and filed a missing person case to recover her.

“Our lives are in danger. If anything happens to us, the  Sindh police, Punjab police, and  my parents will be responsible.”

The father of Dua Zahra has approached the Sindh High Court for the recovery of his daughter as he claims she was underage. According to the law in Sindh, marriage before the age of 18 is illegal, while the age limit in Punjab is 16 years.

The Sindh High Court has issued notices to all parties concerned, including the girl’s husband, on the petition filed by Dua Zahra’s father for her recovery.